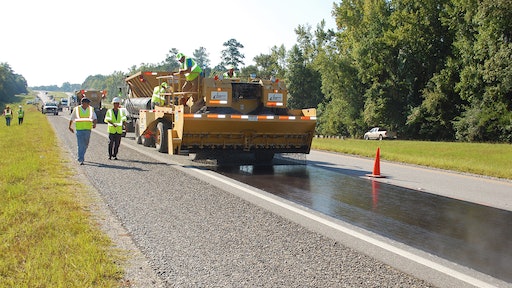 Sponsors of the sixth cycle include highway agencies and private sector partners. The number of sixth cycle sponsors funding on and off-Track research is currently at 18, and additional sponsors are anticipated.

The sixth research cycle is commonly referred to as the “2015 Track” and will last until the end of September 2018.

The first phase of the sixth cycle consisted of constructing test sections on and off the Test Track. Representatives from research sponsors make on-site visits during this phase in order to ensure that the sections satisfy their research needs.

In the second phase, each section on the track is subjected to 10 million equivalent single axle loads (ESALs) of heavy truck traffic applied over a period of two years. The performance of each track section is closely monitored on a weekly basis.

A new automated pavement distress data collection vehicle will be used to quantify roughness, macrotexture, rutting, and cracking in the same manner used by most state highway departments for their pavement management systems.

Other tests such as surface friction, falling weight deflectometer, sound, and permeability are also conducted. Similar performance data is conducted on the off-track sections, but due to the open traffic on these roadways, data collection is conducted on a less frequent basis than the closed-loop track.

The final part of the three-year cycles at the test track involves forensic analyses of damaged sections in order to determine the contributing factors to pavement distresses. Many forensic investigations conducted during this stage include destructive testing such as trenching and coring.

The scope of the pavement preservation research has been expanded in this cycle to include continued evaluation of Lee County Road 159, a low volume route, and new treatment sections on U.S. Route 280, a much higher traffic volume roadway.

In this highly controlled experiment, quantifying the benefits of various pavement preservation alternatives as a function of pretreatment condition will provide transportation agencies an objective basis for pavement management decisions.

In 2014, pavement preservation treatments were applied to several Test Track sections at predetermined distress levels. Traffic and examination of these sections, as well as those on Lee County Road 159, will continue throughout this research cycle.

NCAT and Minnesota Department of Transportation (MnDOT) -- through its MnROAD facility -- have formally partnered for the first time to execute pavement preservation and asphalt mixture performance testing experiments with a nationwide implementation impact.

This partnership brings about expansion of experiments to include a cold-weather climate. Many of the same pavement preservation treatments installed by NCAT in Alabama will also be installed on low- and high-volume routes in Minnesota.

“The overall goal of this research at NCAT is to quantify the life-extending and condition-improving benefits of pavement preservation treatments and treatment combinations on flexible pavements with diverse levels of pretreatment condition in a southern environment under low traffic, high traffic, and accelerated traffic conditions,” says Powell. “Conversely, the goal of complementary research at MnROAD is to do the same thing for their northern environment.”

The causes of cracking

While many tests have been developed to evaluate cracking potential of asphalt mixtures, it’s not clear which ones correlate the best with field performance and what criteria could be used in specifications, says Powell.

This is another focus area of the 2015 Pavement Test Track cycle. The objective is to validate laboratory cracking tests by establishing correlations between test results and measured cracking in pavement test sections.

New track sections have been constructed with asphalt surface layer mixtures that have a range of expected cracking susceptibilities. Other factors that can impact top-down cracking, such as underlying pavement structure and differences in aging, have been controlled to the highest degree possible.

A battery of laboratory cracking tests will be performed, which will include semi-circular bend tests using the Illinois and Louisiana methods, the energy ratio method, and the Texas overlay test.

The analysis of the laboratory cracking tests will identify which method provides results that best correlate with field cracking while also considering practicality for use in mix design control testing, cost-effectiveness, and the ability to accommodate recycled materials, new and future additives, and mix combinations.

In 2016, MnROAD will also build complimentary cracking group sections to validate low-temperature cracking tests. These parallel studies are aimed at producing findings that can be directly implemented by a larger geographic base of state departments of transportation.

New pavement preservation treatments have also been installed on a nearby section of U.S. Route 280, expanding the scope of the research to include a higher volume route and cold recycling techniques.

These sections serve as a complement to existing sections on the Test Track and Lee County Road 159 and are essential to accurately quantify the condition improving benefit curve of each treatment/treatment combination under different levels of traffic.

The core objective of this research is to quantify the benefits of pavement preservation on a more typical highway, somewhere between the accelerated damage environment of the track and the low ADT environment of Lee County Road 159, says Powell.

“Results from the expanded 2015 preservation experiment will provide a rational starting point for the implementation of a life cycle cost based preservation treatment selection process that can be refined over time with location-specific pavement performance feedback,” says Powell. “A second objective is to develop guide specifications and recommend guidelines for quality assurance testing and inspection of pavement preservation treatments.”

How to test the effects of pavement preservation on moisture

NCAT set out to test this theory, and test sections on Lee Road 159 provided a unique opportunity to quantify the potential moisture reducing benefit of pavement preservation. Electronic methods to measure subgrade moisture content, however, have not worked well at the NCAT Pavement Test Track.

A method was needed that did not require the installation of intrusively confounding sensors and roadside hardware. What researches ultimately used was a moisture sealed tube permanently installed in the roadway.

The tube is positioned such that the tip is embedded two inches into the subgrade. At regular intervals, a probe that contains both a nuclear source and a detector are temporarily lowered into the tube. Post installation measurements are directly proportional to moisture content via count ratio (test count divided by the standard count) and factory calibration coefficients.

Using this nuclear nondestructive method, it’s not necessary to permanently install intrusive sensors or roadside data acquisition hardware. The only research asset on the roadway is an empty tube sealed with a recessed top that is temporarily removed with a pull handle to facilitate periodic testing.

Almost three years after the placement of pavement preservation sections on Lee Road 159, moisture contents in most of the treatment sections are still generally lower than the two control sections.

“To the best of my knowledge, this type of testing has never been done before,” says Dr. R. Buzz Powell.

Test Sites for the Sixth Cycle

Lee Road 159 is a local 5½-inch thick dead end county road that provides access to a quarry and an asphalt plant. Like most rural roads in the U.S., Lee Road 159 was not designed at its existing pavement thickness. It evolved from a single lane dirt road to a chip sealed two lane road to a road paved with multiple layers of asphalt pavement. Lee Road 159 currently has 23 study treatments or treatment combinations.