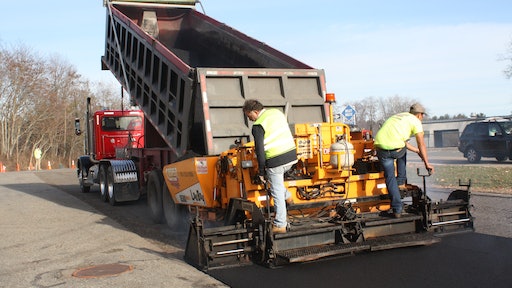 A mill-and-fill paving project employing hot mix with high recycled asphalt pavement (RAP) content was recently carried out at a busy recycling/transfer center in Wellesley, MA, to demonstrate the effectiveness of a new asphalt rejuvenator.

Town officials and others are monitoring the performance of the 40% RAP mix that was dosed with Delta S, an asphalt rejuvenator product of Collaborative Aggregates. The Wilmington, MA, company sponsored the project and served as general contractor.

The area chosen for the Wellesley demonstration lies within the town’s busy recycling and transfer center, where asphalt pavement has deteriorated due to the high volume of traffic, especially from heavily loaded trucks. The center experiences anywhere between 800 and 1,500 residents’ vehicles each day and about 4,000 on Saturdays. In addition, it undergoes continual traffic from the DPW’s regular 6-wheel, 35,000-pound trash collector trucks plus six to eight tractor-trailers that periodically pick up compacted refuse. Due to resulting pavement damage, the site was a good candidate for mill-and-fill and ideal for testing the new rejuvenator.

The demonstration was authorized by the Wellesley Department of Public Works, headed by Director Mike Pakstis, who has indicated they are willing to try new things if they offer cost-effective alternatives that prolong pavement service life. Recycling asphalt pavement and asphalt shingles (RAS) falls within this category, since it reduces the amounts of expensive virgin materials required for pavement construction, freeing up funds for additional roadway improvement projects.

Despite the industry trend to increase asphalt recycling, there is a practical limit to the total amount of RAP and RAS that can be used in making hot mix asphalt for pavements due to the nature of the materials. As the percentages of RAP or RAS in mix designs increase, the higher viscosity and lower ductility of the embedded asphalt due to long-term aging in the field stiffens the mix and thus diminishes new pavement resistance to rutting and cracking. A remedy for this is the use of asphalt rejuvenators.

Generally, rejuvenators can restore the original properties of asphalt binder such as viscosity and ductility. But traditional rejuvenators may contain lubricating oil extracts and extender oils, which may be derivatives of benzene, a substance toxic to humans and the environment. What’s more, some rejuvenators simply soften the binder but do not chemically reverse the oxidation of the aged binder in the RAP and RAS.

In contrast, Delta S is a sustainable, or “green” non-toxic product that is safe for workers and the environment, according to Collaborative Aggregates, an affiliate of Warner Babcock Institute for Green Chemistry (WBI), the research firm that invented the asphalt rejuvenator. Derived from non-toxic renewable feedstocks, the new rejuvenator is designed to chemically reverse aging of existing asphalt binder and retard future aging and oxidation. This in turn helps minimize asphalt pavement rutting and cracking. Since Delta S also has warm mix additive capabilities, the company is marketing it as a sustainable, dual-action WMA/asphalt rejuvenator product.

The demonstration began with the milling and removal of two inches of existing pavement on some 3,000 square yards of entry road, parking and trash recycling area. Mathias Corp. used a Bomag BM 2000/60 for the milling and a Bobcat S750 skid-steer loader for cleanup and sweeping. After the area was swept, Cooper Bros. hand-applied packaged RS-1 rapid-setting asphalt provided by Riverside Asphalt Services to the area in a ribbon pattern.

Meanwhile, Rochester Bituminous used its Gencor drum mix asphalt plant to manufacture the approximately 340 tons of bituminous concrete required for the demonstration project. The hot mix asphalt, made to Massachusetts DOT specifications, was a dense-graded top course containing 6% asphalt binder, with 95% of the aggregate passing a ½-inch sieve.

Dosing, and a WMA trait

It was determined that the stiffer RAP asphalt binder would require dosing it with 4%, or 1.6 pounds, of Delta S per 40 pounds of binder, but in practice the liquid rejuvenator was decanted directly into the virgin asphalt tank at the rate of 1.6 pounds per 80 pounds of virgin binder. The effect of the rejuvenator on each ton of mix would be the same.

“We could have added the rejuvenator to the mix in a number of ways,” Viviano noted. “For example, we could have sprayed it over the belt or bin for the RAP, or blended it in-line with the liquid asphalt using an injection system. But it was easier in this case to pour it directly into the virgin asphalt tank. Delta S is a light liquid resembling vegetable oil, and when you pour it into the asphalt binder, you see it going into solution immediately.”

At the job, Cooper Bros. Paving first applied a levelling course of HMA over the site then followed this with the placement of the 2-inch top course in a single lift using a LeeBoy 8500 paver. The mix laydown temperature was approximately 305 degrees. When the contractor’s 5-ton Galion roller finished breakdown rolling, the mat temperature was about 250 degrees.

A 2-ton Beuthling B200 static roller was used to provide finish compaction, with the HMA still exhibiting workability even though the mat temperature was only registering about 200 degrees.

The 40% RAP composition for the Wellesley demonstration mix is the highest ratio tested to date by Collaborative Aggregates for an asphalt pavement project on this scale. A somewhat smaller installation of asphalt pavement mix treated with Delta S rejuvenator was placed at the test track of the National Center for Asphalt Technology in Opelika, AL to document the rejuvenator’s performance. However, the NCAT installation involved a much more aggressive mix design, and is being subjected to far greater vehicle loads, than the Wellesley project.

NCAT’s 1.7-mile oval pavement test track is designed for accelerated pavement testing of up to 46, 200-foot-long sections of track in two-year trafficking cycles with loading that simulates 10- to 15 years of heavy interstate truck traffic.

The Delta S test section was installed at the track in August 2015 for NCAT’s sixth research cycle, at the same time as a group of sections sponsored by nine state DOTs and the FHWA were placed to study thin overlay pavement cracking. Although Collaborative Aggregates’ NCAT section has 20% RAP content – just half that of the Wellesley project -- it also contains 5% RAS.

The RAP used for this section has an upper failure temperature of 110 degrees Celsius, and the RAS failure temperature is 189 degrees Celsius – both temperatures being substantially higher than usual for such applications. Furthermore, while shingles embed about four to five times as much asphalt as RAP, the recoverable asphalt is considerably stiffer and more costly to incorporate in HMA. Five% RAS is the upper limit currently being employed by most asphalt producers for commercial operations.

The cracking group sections at the NCAT track have mixes containing varying combinations of RAP and RAS. Even though the Delta S section is not part of the cracking group, NCAT officials are going to compare the performance of Collaborative Aggregates’ stand-alone section to one of the group sections that is similar in design and construction but doesn’t contain a rejuvenator.

NCAT believes the results of that comparison will provide them with additional data points to study while they look for ways to accurately predict the crack resistance performance of pavements containing large amounts of recycled asphalt products.

The documentation of Delta S performance at NCAT, with its warm Alabama climate, will be supplemented in the near future with similar documentation of a test section in a colder area of the U.S., according to Collaborative Aggregate’s Viviano. In addition, he indicated there will be more projects like Wellesley taking place elsewhere throughout the U.S. to demonstrate the effectiveness of the company’s new sustainable asphalt rejuvenator.

Such sustainable, or “green” non-toxic products as Delta S are being developed by a staff of more than 35 scientists under scientist/entrepreneur John C. Warner, Ph.D., the president and chief technology officer for Warner Babcock Institute for Green Chemistry. WBI is essentially an invention factory where sustainable technologies are created for all industries that employ chemicals including general construction and asphalt production. About 85 percent of the research at WBI is performed under contract with companies needing or wanting new sustainable products for their own operations. The other 15 percent of research is spent on finding new technologies for WBI’s proprietary purposes.

WBI affiliate Collaborative Aggregates LLC was founded in 2014 to manufacture, market and sell engineered construction products developed by WBI. Delta S is one of those products. Research is also underway on other construction-related products. One in late-stage development is a non-toxic, formaldehyde- and isocyanate-free thermosetting resin that is effective as an adhesive in engineered wood products.

A different kind of scientist, Dr. Warner is both a researcher employing green chemistry to invent environmentally beneficial products, and a businessman making profits while fulfilling customers’ product needs.

A pioneer in green chemistry, Dr. Warner in 1998 co-authored Green Chemistry: Theory and Practice,” with Paul T. Anastas, Ph.D., which established the 12 Principles of Green Chemistry. The textbook was written to make budding chemists aware of the need to study toxicology and consider the effect that the manufacture and utilization of existing and new substances could have on the environment. In recognition of his work with green chemistry, Dr. Warner was awarded the 2014 Perkin Medal by the American Section of the Society of Chemical Industry for “innovation in applied chemistry resulting in outstanding commercial development.”