David Alban has been named chief operating officer and corporate secretary of Ring Power Corporation. The move was effective Dec. 3. 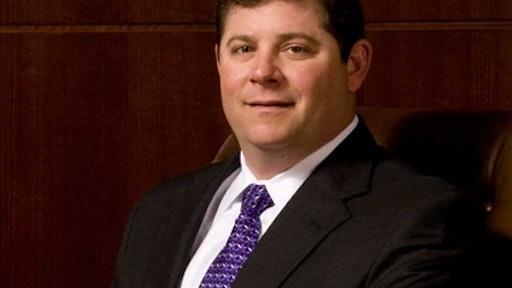 David Alban has been named chief operating officer and corporate secretary of Ring Power Corporation. The move was effective Dec. 3.

In this role, Alban will oversee all of Ring Power's equipment divisions' sales and product support operations, as well as Phoenix products, human resources, training, purchasing, facilities and security.

Alban's career with Ring Power dates back to 2001 in the sales training program, where he spent time working in the service shops, learning firsthand what happens day-to-day. He also worked in the heavy equipment rental department and was promoted to manager of the newly launched agricultural equipment division in 2003.

In 2004, when Ring Power's Six Sigma initiative began, Alban was selected to be a Black Belt project leader. In 2008, he was named vice president of lift trucks. The next year, Alban was promoted to vice president and corporate secretary, with responsibility for power systems product support. In 2010, he added heavy equipment product support, training and safety to his responsibilities.

In his new role, Alban will continue to report directly to Randy Ringhaver, chairman and president.

Arizona topped the rankings for the first time this year based on the state’s promotion of free enterprise and investment in tomorrow’s construction workforce
Associated Builders and Contractors Inc. (ABC)
December 30, 2020

The Future of Data and Privacy in Construction's Digital Age

As the construction industry wades further into a digitized future, it is imperative that companies exercise caution in regards to data.
Association of Equipment Manufacturers (AEM)
December 28, 2020
COVID-19

The construction industry's never had to deal with so many unknowns, and StructionSite recommends a method contractors can use to evaluate, prioritize and act to reduce their risks without being overwhelmed
December 22, 2020
Follow Us