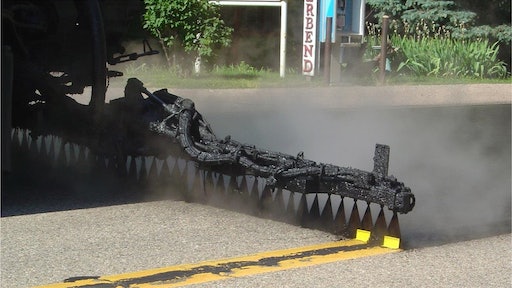 Successful bond or tack coat application will cover complete paving width and will have double or triple overlap by nozzles that are aligned the same way.

As new evidence of their usefulness unfolds, fresh attention is being paid to use of emulsified asphalt tack or bond coats in bituminous paving.

They’re commonly called “tack” coats, but as their purpose is to bond one layer of asphalt to another layer of pavement, industry is beginning to dub them “bond” coats. The same way that fragile, thin veneers of wood are glued to each other to form a robust sheet of plywood, research shows layers of asphalt pavement perform better when bonded to each other.

“An emulsified asphalt tack coat produces a strong adhesive bond without slippage between an existing pavement and a new overlay,” reports the Colorado Asphalt Pavement Association in its 2013 report, Best Practices for Applying Undiluted Emulsified Asphalt Tack Coats. But the performance of this adhesive bond can be endangered by poor placements.

The study was developed by LTRC researchers Louay N. Mohammad, Mostafa A. Elseifi, Abraham Bae, and Nachiketa Patel; Joe Button of Texas A&M University; and consulting engineer Jim Scherocman. In the past, application of tack or bond coats mostly has been a “seat of the pants” operation, but this is changing, the report says.

“Selection of an optimum tack coat material and application rate are crucial in the development of proper bond strength between pavement layers, says NCHRP 712. “In general, selection of tack coats has been mainly based on experience, convenience, and empirical judgment. In addition, quality-control and quality-assurance testing of the tack coat construction process is rarely conducted, resulting in the possibility of unacceptable performance at the interface and even premature pavement failure.”

To this end, the report articulates optimum application methods, equipment type and calibration procedures, application rates, and asphalt binder materials for the application of bond coats, and recommends revisions to AASHTO methods and practices. A significant driver in this report is the development of two new devices for testing of bond coats, the Louisiana Tack Coat Quality Tester (LTCQT) and the Louisiana Interlayer Shear Strength Tester (LISST), the former for field use, and the latter for lab use.

The LTCQT evaluates the quality of the adhesive strength of bond coat on the job site, and adds a new dimension of quantification of field testing of bond coat applications. To complement this device, the LISST was developed for the characterization of interface shear strength of cylindrical specimens in the laboratory

LTRC’s research for this project also resulted in the development of a training manual, presented as an appendix in the report. The training manual provides a comprehensive presentation of the recommended construction and testing procedures for tack coat materials.

The need for bond coats is clear, but their application is inconsistent and varies widely among both contractors and road agencies.

Some local road agencies don't provide detailed bond coat specs. In its own way, at least one DOT doesn’t require them on milled surfaces. If tack coats are not a contract pay item, their application may be at the mercy of the contractor, who might consider bond coats an additional expense that is not specified.

Nonetheless, best practices are established. For example, for maximum service, bond coats should be evenly distributed across the full width of clean pavement, not just as the commonly seen narrow spritzes on the substrate. Spray bar nozzles must overlap, ideally in multiples of three; triple overlap is recommended for higher application rates such as chip seal, but may not be achievable for lower rates of bond coats.

The emulsion must be dispersed with the right spray pattern, at the right temperature and volume. Long after the paving is completed, inadequate adhesion between two layers of bituminous mix may cause problems in the mat above.

“If [the overlay] can’t stick it’s not going to bond,” said consulting engineer Dale Decker, P.E., at a seminar on tack coats during World of Asphalt 2015 in Baltimore. “And if we don’t get the bond, we’re wasting our money.”

Moreover, from the owner and contractor point of view, this bonding of layers via asphalt emulsions comes at a relatively small price.

“An analysis of bid tabs using 2013 data shows that the cost of tack coat is relatively minor compared to other components of a typical paving project,” Decker said. “Therefore, the risk of a poor or a compromised bond from not applying tack should be deemed too great when one considers the ramifications of the loss of fatigue life from this condition. Tack is such a cheap component that it makes little sense to shortchange this critical step and introduce so much risk.”

As indicated, the possibility of skipping the bond coat arises with milled surfaces. “While some research indicates the skipping of tack on a milled surface will still result in adequate bonding of layers,” Decker said, “the weight of research indicates that the use of tack improves the bond of a milled surface that has been properly cleaned. As with the first scenario, the cost of tack is so small relative to the cost of premature pavement failure, it is foolhardy to skip applying tack.”

Do new pavements need tack coats? “NCHRP recommends applying tack coat always,” Decker said. “I don’t disagree with that. Tack coat is the cheapest insurance you can possibly buy as a contractor. It just makes a lot of sense.” The Asphalt Institute also recommends tacking between all lifts.

It’s easy to see why asphalt emulsions are preferred for bond coats. Straight or “neat” liquid asphalt must be kept heated to stay liquefied, and that poses burn hazards and other safety problems as the distributor moves around on the site.

Asphalt – what remains after lighter hydrocarbons have been distilled from the crude oil at a refinery – also may be liquefied by reintroducing some of those lighter hydrocarbons, such as kerosene or diesel, as a solvent. These “cutback” asphalts have been widely used in the past for tack coats, but today are discouraged because as the solvents evaporate, volatile organic hydrocarbons are released which contribute to smog and other environmental ills.

An asphalt emulsion is a homogeneous mixture of two insoluble substances, oil and water. In it particles of liquid asphalt (the dispersed phase) are surrounded by molecules of water (the continuous phase). Compared to hot liquid asphalt, asphalt emulsions have greatly reduced viscosity, are safe to use at lower temperatures, and allow liquid asphalt to be spread more evenly and thinly.

Emulsified asphalt is produced by dispersing tiny globules of asphalt cement into water treated with a small quantity of emulsifying agent. The dispersion takes place in a powerful blender, called a colloid mill, where spinning blades break or shear the liquid asphalt into suspended microscopic particles. The water, or soap solution, is immediately introduced to form the emulsion.

The emulsifier – an engineered surfactant (detergent) or surface-active agent – maintains the microscopic asphalt droplets in a stable suspension, keeping them from recombining. The amount and type of surfactant used, along with other variables, controls properties of the emulsion critical to performance in the field application.

The correct placement of asphalt emulsion as a bond coat is important for long-lived asphalt pavements. Here are some tips for a successful bond coat.

For more information about bond or tack coats, or about asphalt emulsions, visit the Asphalt Emulsion Manufacturers Association at www.aema.org.