Tech start-up Lvl5 was designed for the future of autonomous vehicles but their HD maps, populated by paid drivers, are being put to use today for real-time road repairs 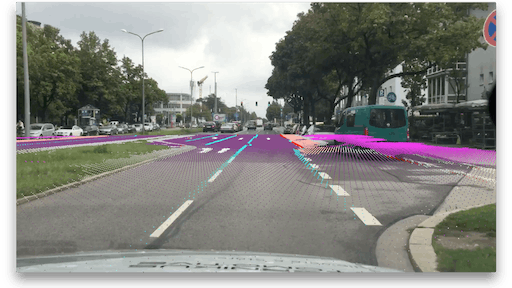 In our world today, the current system for fixing roads on the city level relies on people to notify the public works department of potholes or other road problems that need to be fixed. Usually these people are angry that said pothole caused damage to their vehicle and demand it to be fixed now. This reactive approach is costly and inefficient, but a new start-up called Lvl5's wants to change that.

We’ve heard of crowdsourcing for funding new ideas and projects, but the idea hadn’t quite made it to the road building industry until now. Lvl5 is a company that was initially developed to created high-definition maps that auto manufacturers could use to help their autonomous vehicles navigate roads without LiDAR. But since we’re likely still years away from the need for this technology, the San Francisco-based start-up needed a way to make their business useful now.

Using their HD maps, Lvl5 created Payver, a dashcam that rewards their customers just for driving. The large network of drivers using Payver are paid up to $.05 per mile to use their smartphones as dashcams that scan the road and uploads the video to Lvl5's mapping platform, building high-definition maps of the roadway. Lvl5 then sells this detailed street data to city governments.

The company's compression algorithm looks for any changes to roads compared to its existing data and frequently updates its maps to reflect new signs, lights or infrastructure changes. These maps are so detailed that the system knows where every pothole is and even where the cracks are on city roads. This technology could help save taxpayers money if local governments could fix these little problems before they become big.

"We use this data to help city governments maintain the roads," Lvl5 CEO Andrew Kouri says. "Because we have about 10,000 people helping us map on a daily basis, our updates are really frequent. As soon as a crack happens in a road, we can detect that and tell them a crack has started to form so they can send someone out there to fix it before it turns into a pothole."

With millions of miles of data collected from around the world, Lvl5 has a unique advantage to create algorithms that can score roads based on numerous variables. Kouri says the objective variables they currently score include alligator cracking, paint fading, uneven pavement, potholes and the surface area of a multitude of other road blemishes.

"Interestingly, most of these 3D measurements we were able to borrow from our self-driving car mapping process without much modification," he says. "Our proprietary deep learning algorithms also leverage the strengths of convolutional neural networks, including multilayer perceptrons, to also identify certain subjective features that humans would attribute to a failing road."

At present, when public works department is notified of a problem, officials must send a truck equipped with expensive sensors to locate and gather data about the affected street. Currently, Lvl5 is inviting cities to work with them via an API (application program interface) to provide access to the data at a per-street level. This means a city can check the exact condition of any given road (with raw image evidence to support it) where they have coverage.

Kouri says the API automatically sends pictures of an identified defect along with measurements gathered from its high-definition images that can help cities  prioritize road issues and reduce repair costs by catching problems earlier. Because its system is crowdsourced and automated, they can provide the service for less than $70 per mile compared to the current rates of several hundred dollars per mile he says.

The technology, which is tested to work up to 65 mph in broad daylight conditions, could also make cities that use the data safer.

"There are several ways that Lvl5's data is making driving safer," Kouri says. "For one, notifying cities of poor road quality can help them keep their infrastructure safer for all motorists, including cyclists and motorcyclists. Second, fading lane lines are a big problem for the future of autonomous vehicles. Our technology helps keep track of fading lane lines and can notify cities when they need to re-stripe the roads so that autonomous systems (which depend highly on the painted lane lines) are less likely to fail."

"We hope to bring about full self-driving sooner by scaling up map building all over the world," Kouri says. "With Road Quality, we would like to help cities lower taxes for citizens by spending their money more efficiently on failing infrastructure before it balloons into bigger problems."

Kouri says the Utah Department of Transportation is evaluating Lvl5's technology and others could follow since Payver currently has users in all 50 states.

Payver is the dashcam that rewards users just for driving and only needs access to a customers location and camera to function properly.

Earn Points
Each trip you upload gives users points that they can exchange for prizes such as cash, gift cards, etc.

Help keep road infrastructure up-to-date
By using Payver, users are helping keep road maps up-to-date. They use the data to find problems with roads and alert the right government authorities. The app automatically looks for potholes, fallen signs and construction zones from the video captured.

Trip Log
The app keeps track of where users have been and they earn badges for certain achievements like visiting a National Park. Payver creates beautiful time lapse videos of trips so users can see their entire drive in 30 seconds.

Keep evidence
Users can also keep proof of dangerous incidents on the road for safe keeping in case of an accident or incident. Payver automatically triggers a 30 second snapshot when it detects hard braking events.

The app can be downloaded at https://getpayver.com/

There has never been a better time to recruit Gen Z and Millennials. Learn how to better attract the up-and-comers with these tips.
August 1, 2020
Latest

World of Asphalt is heading to Atlanta from March 9-11, 2021. The show is celebrating twenty years of bringing the asphalt industry together by honoring twenty asphalt companies with $500 toward attending the show.
Association of Equipment Manufacturers
August 5, 2020

Woolpert Construction will expand SR 48 from three lanes to five which will alleviate congestion and promote safety in a growing region of the state.
July 15, 2020

At 64 years old, our aging interstates are facing increased congestion, unprecedented levels of travel and a funding backlog of $123 billion to make the repairs and improvements that are needed.
Jessica Lombardo
July 14, 2020
Follow Us