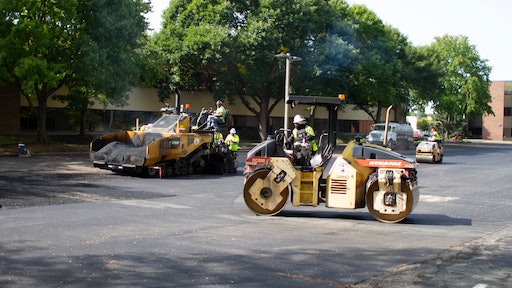 At the job site, the E&B Paving crew pours and rolls the RAP and Invigorate rejuvenator mixture, creating a smooth surface for the parking lot.

Asphalt is a green product. Not only does it make excellent economic sense for agencies, producers and contractors, it is green in its sustainability. Asphalt is the top recycled product in the United States with nearly 100 million tons going back into mixes each year.

There’s sound economic reason for this. According to the National Asphalt Pavement Association (NAPA), using recycled asphalt pavement (RAP) saves American taxpayers and consumers more than $2.8 billion annually. Additionally, running as much RAP as possible, “can certainly benefit our members, our industry, taxpayers and the general public,” says Kirsten Pauley, executive director of the Asphalt Pavement Association of Indiana (APAI).

There is, however, a balancing act between higher RAP mixes and final product durability. RAP binder is old, oxidized, brittle, and, if not treated properly, can lead to workability issues when paving and premature cracking. “You really want to push that envelope of including as much RAP as possible but also make sure that you’re going to maintain that long-term performance of the asphalt pavement,” continues Pauley.

For this reason, states typically cap the amount of RAP used on major roadway projects. “In Indiana, we are limited to a maximum of 25% binder replacement in our asphalt mixes,” explains Elizabeth Pastuszka, HMA design and Q.C. coordinator – north, for E&B Paving, LLC, Anderson, Ind. At this level, asphalt producers can offer the balance of sustainability and a workable asphalt with acceptable low-temperature cracking resistance.

This presents problems for producers, since 100% of the asphalt road can be milled and brought back to the plant but only 25% or so can be put back into the mix. “This can lead to a surplus of RAP at some plants, and we have to find alternative applications or, worst-case scenario, it may end up in a landfill it if we run out of space,” says Pastuszka. “If we could put more RAP into the mix, it would allow space to open up at our plants, therefore causing less waste.”

At issue with increasing RAP is the brittle, oxidized binder that makes a stiffer mix that can crack prematurely if not modified with a rejuvenator. Traditional rejuvenators currently available work by injecting maltene-rich material into the oxidized binder, changing its viscosity and, therefore, crack resistance.

Researchers at Iowa State University (ISU) in Ames, Iowa, along with Ames-based Colorbiotics, a brand of the MBCC Group, have been studying rejuvenator performance. They have found that traditional rejuvenators create a viscosity change that do nothing to address or reverse the adverse effects of the aging process.

Asphalt binder composition includes two primary components: asphaltenes, which give it its structure to prevent rutting; and maltenes, which give it wax and liquid-like properties for flowing and aggregate coating. “As binder ages, the asphaltenes get larger and agglomerate, which leads to asphalt brittleness and cracking,” says Chris Williams, professor of Civil Engineering at Iowa State University. He says that adding more maltenes without addressing the asphaltenes does not fully address the low-temperature cracking issues from the aging and asphaltene agglomeration in the binder, which is where traditional rejuvenators fall short on performance.

Researchers at ISU have developed a new soybean oil-derived rejuvenator – Invigorate™ – that triggers a chemical reaction inside the stiff RAP binder to break down asphaltene aggregation to reverse the effects of oxidation in the aged binder. Invigorate, developed by researchers at ISU, is marketed and sold by Colorbiotics. “This breakthrough technology improves asphalt’s recyclability, while still meeting performance-grade binder specifications,” says Dan Staebell, Colorbiotics asphalt business development manager.

This has major implications for asphalt producers and contractors, offering the potential to increase RAP content in mixes while improving the asphalt’s workability and longevity. “With the Invigorate rejuvenator, we have been able to meet specifications and increase RAP content to as much as 50%, which is well beyond the standard current limits,” adds Staebell. “This not only delivers environmental and economic benefits by allowing higher RAP content in mixes, but it also offers the added sustainability dimension, since it is a renewable resource and soybean-derived.”

Invigorate can be incorporated in various economical ways. “Because it is very compatible with asphalt binder, blending and homogeneity is easily achieved,” Staebell explains. “Blending can happen directly in line at hot mix asphalt production facilities, incorporated at terminals or in tanker deliveries.”

E&B Paving recently worked with Iowa State University and Colorbiotics to test the Invigorate rejuvenator on a tight asphalt parking lot application in Indianapolis. “We’re always looking for new ways to make good quality pavement that is also sustainable,” explains Pastuszka. “Good for the environment and, if economical for the company, it seemed like a win-win all the way around.”

For the project, E&B Paving ran approximately 300 tons each of a 9.5 mm surface mix with 40% RAP content using Invigorate and a second experimental biopolymer with a rejuvenator. The plant also ran a smaller amount of a standard 9.5 mm surface mix with 25% RAP and no rejuvenator as a control section. The volumetric design targeted 5% air voids for optimum binder content.

Mixed at a temperature between 285- and 300-degrees Fahrenheit by a counterflow plant at E&B Paving’s Noblesville, Ind., Stoney Creek plant, the asphalt was trucked 30 minutes to the project site of the Indiana Soybean Alliance. “This soybean-based rejuvenator for asphalt initially started off as a joint project with Iowa Soybean with some involvement of the United Soybean Board,” mentions Courtney Kingery, CEO of Indiana Soybean and Indiana Corn Marketing Council. “When Indiana heard about it, we knew we needed to get our parking lot repaved, and we wanted to support and move the project forward.”

While not sizable in tonnage, the U-shaped parking lot surrounding the office building posed several challenges for the paving crew, including short pulls, varying paving widths and inverted drains. The crew used an 8-foot paver to lay the mix, followed by its typical parking lot compaction train of a mid-sized vibratory breakdown roller and small steel finish roller.

Prior to paving, the top 1.5 inches of the lot’s asphalt surface was milled and recycled. The paving crew followed with a 1.5-inch overlay compacted of the three different mix designs. Target breakdown rolling temperature ranged between 200 and 240 degrees.

“Tight lots are some of the hardest paving there is with offset paving, inverted drains, short pulls and hand work,” says Stephen Perkey, paving foreman in his 12th season with E&B Paving. “It’s nice to have the extra heat in the mix as there are a lot of variables that come into play as far as getting the mix on the ground.”

Even with the challenges posed by the tight application, E&B paving’s crew made quick work of the parking lot. Densities exceeding 95% were achieved with the rolling pattern and the high RAP mix with Invigorate rejuvenator.

Perkey was pleasantly surprised with how workable the Invigorate mix was, even though the RAP content was 40%. “A lot of times a mix with high RAP content can be tough to work with, and it will lose temperature fast. I’ve noticed this mix has been very easy to move, it has similar workability to our traditional 9.5-millimeter mix, and it has a really good shine and looks slick on the top like we want,” he says.

More importantly, the Invigorate mix test samples performed well in the Hamburg Wheel Tracking Test for rutting and CT Index and the Illinois Flexibility Index (I-FIT) test for cracking. “The CT Index and I-FIT results with Invigorate were higher than the control specimens, which indicates a higher cracking tolerance of the mix with Invigorate. The Hamburg Wheel Tracking Test results for all specimens were also very good, with maximum rut depths 6.0 mm or less after 20,000 passes, explains Pastuszka. “In addition to the performance testing, we analyzed the rejuvenator costs compared to RAP content for the mixes on the project. With the information yielded from the performance testing and additional testing, Invigorate may be a cost-effective solution for running higher RAP mixes.”

Commenting on the project, Staebell mentions the performance tests confirm that Invigorate offers producers a successful solution for running more RAP in the mix. “It’s encouraging to see results that show cracking performance better than the standard RAP mix design when incorporating high-RAP content with the standard PG binder,” he says.

APAI’s Pauley was also satisfied in the final product delivered by E&B Paving with the Invigorate high-RAP mix. “We see asphalt laid day-in and day-out, and I wouldn’t say this looks much different. I think of the opportunity of what this could present long-term. In the few phone calls I made to the Indiana Department of Transportation and Indianapolis Department of Public Works, they were excited about the prospect of exploring a new technology and finding a product they could use that is going to avoid some of the cracking and pothole issues that we run into in our state,” she says.