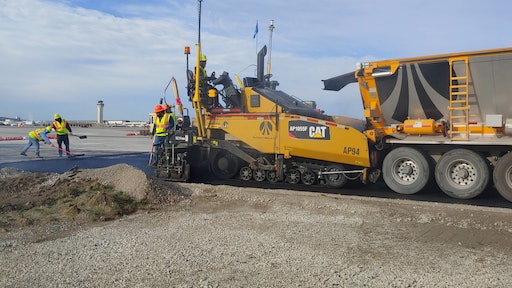 Automatic controls for construction machinery have emerged over the last decade with the goal of helping contractors do their jobs more efficiently. Using technology to better manage equipment usage has been an eye-opening experience for the industry as they adapt to getting more work done even faster with the help of these new processes.

3D paving control is one technology that hasn't exactly gained the momentum in the industry that it should have. 3D paving allows the system to directly reference the design rather than a surface or stringline of the surface. This minimizes asphalt usage, reduces waste and overruns, and helps projects finish on time and under budget; all things contractors are trying to do on every job.

Without 3D paving controls, contractors are relying on paint markings or stringlines to reference grade and elevation and manually changing the screed to match.

"A lot of the old school contractors will still go out and spray paint on a road to be paved a depth and a cross slope and then the operator looks at these spray painted instructions on a road and reacts to that on their asphalt paver," Davin Laubhan, paving product manager at Trimble says. "That's very difficult to do and that opens up a lot of room for error."

There are also 2D technologies out there contractors are using that can reference any existing surface using sonic sensors or averaging beams that are put on the side of an asphalt paver. All of these methods have had their place in the past, but do not give contractors the complete picture which can lead to the best results.

"Through a 3D model, we are dynamically able to to adjust that asphalt paver screed either to a specific elevation or cross slope to match the 3D design," Laubhan  says. "By referencing that 3D design, the first and foremost thing that we can do is eliminate stringlines on a jobsite. Stringlines are expensive, they take time and they cost money, not only for the material, but the crews. These paving control systems can reduce waste and overruns and help contractors finish on time or ahead of schedule which hopefully means they are also under budget."

Asphalt is a perishable material. You only have a short amount of time to put it down before it's no longer useable. If you put it down and it's not done correctly, the costs to remove and replace are devastating to the bottom line of a business.

Technology has been developed to help contractors prepare for success during every step of the paving process.

"With the Trimble business center software, there is a site takeoff feature that is one of the best ways to estimate these material quantities from the start," Laubhan says.  "Trimble Business Center is utilized in the back office to create a design that allows us to know what our target elevation is and what our existing surfaces are. The Business Center Software can calculate those material quantities that would be needed for accurate estimating on a daily basis so not only does that help on every project, but contractors can place more accurate raw material orders with the asphalt plants."

The Business Center can help plan things like the number of trucks required as well as help you estimate round trip times based on your material quantities so that you don't have to stop the paver to wait for trucks.

"The technology helps us control our materials from the bottom up," Sumie Abdishi, general superintendent at Builders Asphalt out of  Elk Grove Village, IL says. "From not taking too much dirt away from the job to using the correct amount of stone, and the correct amount of asphalt to keep our yields in line. It helps a lot. And, you know, there's a reason why the office keeps telling me to use it, because they're seeing returns."

Like most companies who try out new innovations, Builder's Asphalt was forced in to it. They were hired to help reconstruct and expand the Illinois Tollway which specified 3D controls in the bid.

"The Tollway job is what started us on the 3D paving system technology," Abdishi says. "It was either that or we had to set up a stringline which would have cost us in the long run probably more money."

The Tollway required the 3D technology on the machines to ensure specifications were being met and that the project owner had access to the necessary data to ensure the performance of the pavement.

"That's a huge initiative at Trimble right now," Laubhan says. "What we're trying to do with machine control, not just paving but machine control in general, is work harder to connect customers with their data. Connecting field to office is a big initiative for us right now and making sure that the data that needs to be collected, and whoever is asking for it, whether it be a project owner or a stakeholder, that they have access to that. We also want to make sure they're able to seamlessly integrate that data from office to field through the cloud."

While Builders may have started using 3D controls out of necessity, Abdishi says his company wouldn't go back to the way they did things in the past.

Abdishi says using 3D controls on the earthmoving and grinding equipment is where they see the most benefit.

"If I had it my way, on any job, I would try to create the base with 3D and then use the paver to laminate the surface," he says. "It's more efficient for us and gives us a true design on the base that the paver can just flow over."

Builders now sees a use for this technology on almost every job they encounter, not just the big ones.

"It seems like we have a need for it everywhere we go," he says. "We've had a couple of jobs that require variable depth milling and we're using it on a rail yard in the city of Englewood and then we're going to use a motor grader with 3D control in a subdivision and use the paving to laminate over what we've created on the base."

"Contractors need to start embracing this technology around the country," Laubhan adds. "Once they figure out that it can actually build better pavement structures by using it, and that it increases the life of the road, this is definitely going to be something that you will see a lot more specifications being written around."

Many times in the industry, we hear contractors give excuses as to why they won't be implementing new technology, but the time is now to break past those barriers.

"The contractor may look at this, like, wow, this is expensive, because it can be. They also say they don't have the ability to train their people, because they're already super busy as it is," Laubhan says. "My answer to that is, you know, life isn't going to slow down. We live in an increasingly connected and digitized world where we order things on Amazon and we expect it here in two days, because we have Prime, right? That's the expectation now. Technology is the way of the future and contractors who are adopting this technology now are taking care of their learning curve today before some of this stuff actually starts to be mandated and required on these pavements."

And our industry will start seeing more technologies like this required on jobs and it might start happening sooner than you're ready.

And Laubhan says you don't need to outfit your entire fleet with new technology for it to make a difference to your operations.

"Start with one machine," he says. "I don't care if it's a paver or a dirt machine but get some technology on there. Figure out how you can use it to increase your efficiencies, save time and move faster to get your jobs completed. And then once you're comfortable with that, you can move on to the next machine, and then the next machine. Then you can really start to see these efficiency gains as you implement technology across the fleet."

"I know it seems scary because those price tags are pretty big when you first start," he says. "Start little by little. Get one piece of equipment plumbed and ready to go. Then go back and look at your returns. See how you've increased productivity and also see how you've managed your quantities. I think most people will find that once they go there, they're not going to go back."