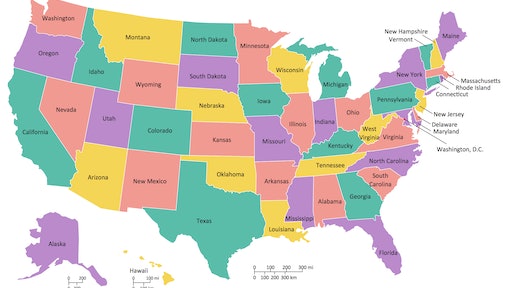 Repairing or replacing aging transportation infrastructure, such as roads and bridges, will require U.S. states to shoulder additional cost burdens since federal funding has stagnated over the last 20 years, Moody’s Investors Service says in a new report. States with large maintenance burdens and backlogs will face budgetary challenges in meeting these needs.

US federal highway aid has seen little growth from fiscal 2009-15 and is projected to remain flat when adjusted for inflation through fiscal 2020. The federal government funds transportation infrastructure through the national gas tax, which last changed in 1993. Transportation spending will require a larger chunk of state capital expenses under current federal policy. Depending on its implementation, the incoming administration’s plans may ease states’ burden.

From 2006 to 2016, combined state and federal transportation spending increased to $153 billion from $109 billion, with states picking up 70% of the total increase, according to the report “States – US: States Increasingly Picking Up Tab for Spending on Bridges and Roads.”

“As states look to allocate their resources among growing health care and education needs, they cannot devote as much to transportation infrastructure as they might want. States will increasingly leverage motor fuel and other road taxes to issue more debt, which will lead to a faster increase in transportation-related debt than overall state net tax-supported debt,” author of the report and Moody’s AVP-Analyst Julius Vizner says.

For some states, years of underinvestment can lead to a disproportionately large financial responsibility which can reduce future fiscal flexibility.

"Some states could easily erase their road surface and bridge maintenance backlog; nine states face burdens of less than 5% of fiscal 2014 revenues,” Vizner says. Among them, Hawaii (Aa1 stable) has a 1.8%, or $116 million, backlog while Florida (Aa1 stable) has a 2.7%, or $1.1 billion, backlog. Both are manageable. Other states have high backlogs, such as West Virginia (Aa1 negative), which has a $4 billion backlog, or 63% of annual revenues.

President-elect Trump has proposed increasing infrastructure spending by $1 trillion over the next 10 years, although funding sources and timelines have not been determined. Even if Trump’s plan proceeds, states will continue to have a central role in transportation and infrastructure planning and funding.

Report: Large Increase in US Infrastructure Spending Will Be Slow to Develop