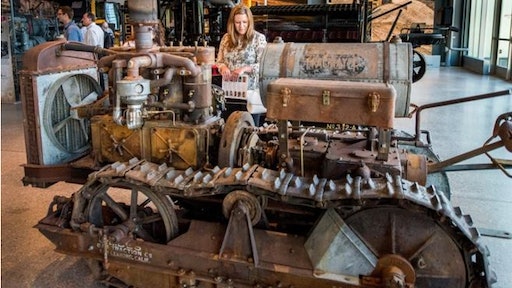 On display is a 1919 Best 25 Tracklayer on display at the Caterpillar Visitors Center. It was originally marketed to do the work of 12 horses. This machine was found in 2014 by a hiker in an abandoned California mine. The unit had to be airlifted out, piece by piece, with a helicopter.
Fred Zwicky/Journal Star

But more mundane minutiae on the meticulously restored Caterpillar Twenty that made its debut Tuesday at the Caterpillar Visitors Center define its unique position in the lineage of track-type tractors.

The serial number reads “EXP 0000-L” — marking it as the first machine to roll off the California production line as an official piece of Caterpillar Tractor Co. equipment following the merger of the now iconic brand’s predecessors, C.L. Best Tractor Co. and Holt Manufacturing Company, in 1925.

“What you see here is the first Caterpillar made by Caterpillar,” said Matt Veerkamp, whose family loaned the historic specimen and a handful of other rare antique tractors to the company for a yearlong exhibition.

Karl Weiss, the Caterpillar Inc. vice president with responsibility for earthmoving equipment, oversees production of direct descendants of the early-model tractors on display as part of the new Antique Equipment Expo at the visitor center.

He pointed to the machines Tuesday as the foundation for Caterpillar’s evolution into a global icon.

“It never ceases to amaze me the strength of our brand, and our brand was built with machines like this,” Weiss said.