Despite adjusting 2012 outlook down, the world's largest equipment maker is on pace to finish the year with its best sales and profit in history 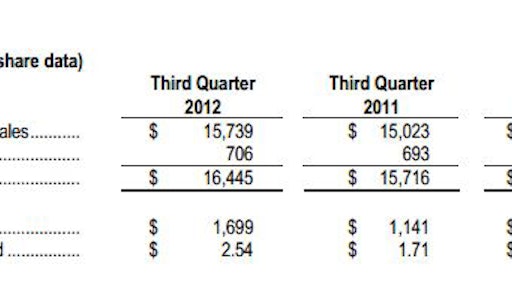 "Last quarter and then again a month ago at MINExpo, we discussed economic and geopolitical headwinds facing the world, and we are certainly continuing to see the impact of those uncertainties in our business," said Caterpillar Chairman and Chief Executive Officer Doug Oberhelman. "Even so, we had a record third quarter, and our entire organization is focused on finishing 2012 as the best year for sales and profit in our history. Despite the turbulence in the global economy, we continue to track toward our goals on cost control, margin improvement, product quality, safety and better product availability for our customers."

The decline in the sales and revenues outlook reflects global economic conditions that are weaker than previously expected. In addition, Cat dealers have lowered order rates well below end-user demand to reduce their inventories.

Production across much of the company has been lowered, resulting in temporary shutdowns and layoffs. Lower production will continue until inventories and dealer order rates move back in line with dealer deliveries to end users. The reduction in the profit outlook is in line with the lower sales and revenues outlook, partially offset by the gain on the sale of a majority interest in third party logistics business.

Preliminary 2013 outlook
From an economic standpoint, Caterpillar expects slightly better world growth in 2013 with modest improvement in the United States, China and most of the developing world, but continuing difficulty in Europe. Caterpillar's preliminary outlook for 2013 is for sales and revenues to be about the same as 2012 in a range of up 5 percent to down 5 percent.

"We are taking a pragmatic view of 2013—we're not expecting rapid growth, and we're not predicting a global recession," said Oberhelman. "At this point, we expect 2013 sales will be similar overall to 2012, but with a slightly weaker first half and a slightly better second half. While machine deliveries to end users have continued to hold up, our sales will probably remain relatively weak early in 2013 as dealers are likely to continue reducing inventories. When expected dealer inventory reductions level off, and easing actions by central banks and governments around the world begin to improve economic growth, we expect our business will begin to improve."