A new TRIP Report says the rural transportation system in the U.S. is in need of repairs and modernization to stimulate economic growth in communities nationwide and decrease overall traffic deaths. 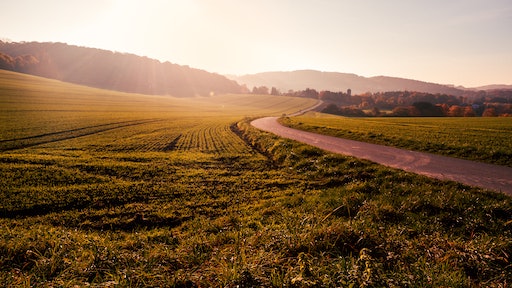 The report assessed the conditions and safety of America's rural roads and bridges, and states improvements are necessary to resolve rural roadway deficiencies, high fatality rates, a lack of connectivity to other communities or major highways and an inability to accommodate higher traffic volumes.

TRIP studies found 15 percent of U.S. rural roads are in poor condition, 21 percent in mediocre condition, 16 percent are rated as being in fair condition and the remaining 48 percent are in good condition. The report also showed 10 percent of U.S. rural bridges are considered structurally deficient - having significant deterioration to major bridge components. Additionally, traffic crashes and fatalities on rural non-Interstate roads are reported to be disproportionately high, two-and-a-half times higher than on other roadways.

The nation’s rural areas account for 97 percent of America’s land area and are home to the vast majority of the nation’s 2.2 million farms. These rural residents often must travel longer distances to access education, employment, retail locations, social opportunities and health services. This means they're doing more driving than their urban counterparts making the need for these roads even more vital.

The rural economy is also far more reliant on goods production, which includes farming, forestry, fishing, mining and energy extraction and manufacturing, than is the nation’s urban economy. This means that these residents need goods transported to and from their locations. Because of this. trucks account for the vast majority of transportation for perishable agricultural items, carrying 91 percent of ton miles of all fruit, vegetables, livestock, meat, poultry and dairy products in the U.S.

In addition, travel loads on America’s rural roads are increasing dramatically due to the booming energy extraction sector. This has been driven by increases in domestic oil and gas extraction, largely as a result of advancements in hydraulic fracturing (fracking), which has greatly increased the accessibility of shale oil and gas deposits, as well as the increased production of renewable energy such as wind and solar.

TRIP says that a highly competitive and efficient transportation system on these rural roads can lead to lower food costs for U.S. consumers and higher market prices for producers due to lower shipping costs, smaller margins and more competitive export prices.

Safety an Issue on Rural Roads

The report also notes that safety is a large issue on these rural roads with traffic deaths occurring at a disproportional rate. 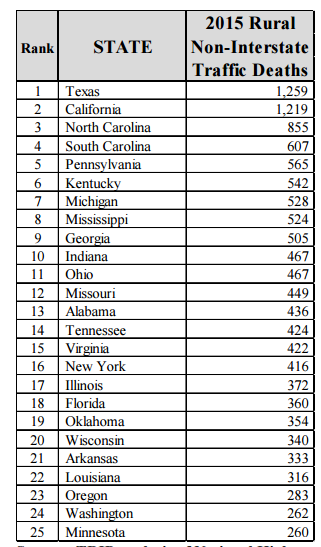 Key factors that contribute to fatal traffic crashes include the following: human behavior, safety features of the vehicle, emergency response times, medical care of the victims and the safety design of the roadway.

Rural routes have often been constructed over a period of years and as a result they often have inconsistent design features for such things as lane widths, curves, shoulders and clearance zones along roadways. TRIP says adding safety features and creating a consistent design for the roadways will help improve safety.

The addition of rumble strips, lighting and guard rails can significantly improve safety at a low cost. The report also mentions median barriers, paved shoulders and the construction of passing lanes at a higher price point to bring these roadways up to a higher safety standard.