President Donald Trump signed an executive order on Tuesday that would help change "disgraceful" regulatory and permitting process which he calls a "massive, self-inflicted wound." 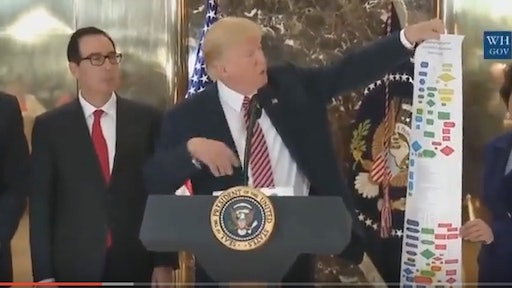 President Donald Trump signed an executive order on Tuesday "establishing discipline and accountability in the environmental review and permitting process for infrastructure projects," the White House said in a statement on Monday.

"It took 11 months to build the Empire State Building," Trump said. "But today it could take as long as a decade or longer just to get approval to start construction."

Trump, who is visiting his residence at Trump Tower in New York City, said that it would take highway builders up to 16 different approvals involving 9 different federal agencies, governed by 29 different statues.

"One agency alone can stall a project for many many years and even decades," Trump said. "Not only does this cost our economy billions of dollars, it denies our citizens the safe and modern infrastructure they deserve. This over regulated permitting process is a massive, self-inflicted wound."

Trump, who was a real estate developer before becoming president, made rebuilding the country's crumbling infrastructure a top campaign issue.

The directive establishes “one Federal decision” for whether major infrastructure projects can proceed, sets a two-year goal for completing reviews and ensures that federal agencies involved in the permitting process are held accountable by setting up a “quarterly scorecard” of their progress.

He has proposed leveraging $200 billion in government spending into $1 trillion of projects to privatize the air traffic control system, strengthen rural infrastructure and repair bridges, roads and waterways.

In June, Trump said one of the biggest obstacles to new infrastructure projects was "the painfully slow, costly and time-consuming process for getting permits and approvals to build."