More than 47,000 of America's 616,087 bridges are "structurally deficient," according to an analysis of federal data by the American Road & Transportation Builders Association 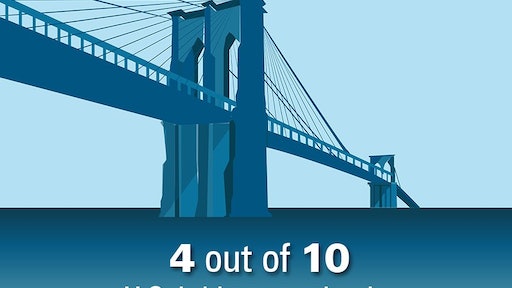 A new report from the American Road & Transportation Builders Association (ARTBA) estimates that 47,052 bridges in the United States are classified as structurally deficient and considered to be in poor condition. Cars, trucks and school buses cross these compromised structures 178 million times every day.

What's worse is that the pace of improvement on these structures has slowed compared to the last five years.

"The total inventory of structurally deficient bridges is down by about 567, which is a very slow pace compared to what we've seen in previous years," Alison Premo Black, ARTBA chief economist who conducted the analysis says. "At that pace, it would take over 80 years to repair or replace those bridges, which is just a ridiculously long time."

Including structurally deficient bridges, there are nearly 235,000 bridges across the country that need structural repair, rehabilitation or replacement, according to ARTBA’s analysis of the NBI data, accounting for 38 percent of all bridges. If placed end-to-end, they would stretch nearly 1,100 miles—the distance between Chicago and Houston. ARTBA estimates the cost to make the identified repairs for all 235,000 bridges is nearly $171 billion, based on average cost data published by FHWA.

However, many of these will need to wait until Congress can agree on a funding mechanism for infrastructure repairs.

"Incoming revenues are not anywhere where they need to be to make all of the needed investments to keep things in a good state of repair and make some of these larger replacement and rehabilitation projects happen," Black says.

ARTBA's primary goal is to aggressively grow and protect transportation infrastructure investment. Many of its 8,000 members stand to benefit from increased funding.

The new standard seeks to protect healthcare workers while allowing other industries, including construction, to set protocols specific to their workplaces.
Becky Schultz
Jun 11th, 2021

Join us Wednesday, June 16 at 2 pm ET as Tim Nash, Wirtgen America’s Director of Concrete Products, for gives an introduction into the SP 64i slipform paver series.
Jun 3rd, 2021
Latest

Being willing to try new technologies and processes will keep you ahead of your competition as work starts to pick up
Jessica Lombardo
Jun 9th, 2021

While the country anxiously awaits the passage of an infrastructure bill, the construction industry should start preparing their crews, equipment and technology today, before new work comes in
Jessica Lombardo
Jun 3rd, 2021

The Memorial Day deadline for sweeping legislation to repair our crumbing infrastructure has passed. Democrats and Republicans are still working to reach an agreement. But big differences remain, and time is short.
Jessica Lombardo
Jun 2nd, 2021

New AGC survey show over half of construction workers report vehicles have entered into their work zones.
Dormie Roberts
May 27th, 2021

Join us Wednesday, June 16 at 2 pm ET as Tim Nash, Wirtgen America’s Director of Concrete Products, for gives an introduction into the SP 64i slipform paver series.
Jun 3rd, 2021

Carlson Paving, Heatec, RexCon, Roadtec, along with the other companies, will no longer operate as separate subsidiary companies and will all take on the Astec name.
Astec Industries Inc.
May 26th, 2021

The Biden Administration made a counter proposal to Republicans, reducing the plan from $2.3 trillion to $1.7 trillion — Republicans set to discuss Tuesday.
Dormie Roberts
May 25th, 2021

In a year full of challenges, Wirtgen America saw opportunity to grow and emerged even stronger from COVID-19
Jessica Lombardo
May 24th, 2021

In this episode, Jess & Dormie talk about the latest news from Washington and also share tips with you on how to stay cool on the jobsite this summer.
Jessica Lombardo
May 21st, 2021

In yet another effort to garner bipartisan support for an infrastructure proposal, House Republicans offer a potential third option for infrastructure funding, one that’s more narrowly focused than either the White House or Senate Republicans’ plan
Jessica Lombardo
May 21st, 2021

Ranking member of the U.S. Senate Committee on Environment and Public Works said the framework for the reauthorization should be unveiled in the next week
Jessica Lombardo
May 20th, 2021

Pecora 322FC is a two-part, product designed for the sealing of pavement joints that experience thermal movement.
Pecora Corp
May 20th, 2021

The 301NS Silicone Pavement Sealant is a one-part product for sealing joints in concrete and asphalt pavements.
Pecora Corp
May 20th, 2021

The company has created a future-based culture that creates positive solutions for customers.
Jun 2nd, 2021
Follow Us