Six state departments of transportation along the east coast of the United States have deployed resources in conjunction with other local, state, and federal agencies to battle the high winds, heavy rain and flooding generated by Hurricane Dorian 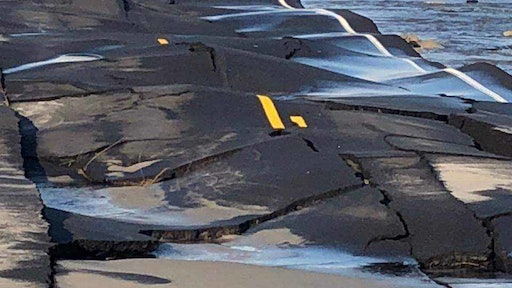 There are currently over 25 other roads either closed or partially closed due to weather damage that NCDOT officials are evaluating and it may be over a week before officials can get out to make damage assessments and estimate what repairs are needed.
North Carolina DOT

Dorian became a hurricane August 28, 2019 hit the Virgin Islands, brought catastrophic damage to the northern Bahamas, then was downgraded to a Category 1 storm right before it made landfall on September 6 along the Carolina coastline. During that time, Hurricane Dorian packed winds of 90 miles per hour that fueled a coastal storm surge of 10 feet in some areas. Less than a week later, floodwaters have receded in the Outer Banks, revealing a muddy trail of damage.

Six state departments of transportation along the east coast of the United States have deployed a variety of resources in conjunction with other local, state, and federal agencies to battle the high winds, heavy rain and flooding generated by Hurricane Dorian.

North Carolina is sending aid to its Outer Banks where Dorian damaged parts of the main highway. Several sections of the road were buckled by the waves and state officials say it could take weeks to fix the roads. Flooded roads and downed power lines are also making getting around a problem.

Help Being Deployed to Repair Roads in North Carolina

The North Carolina Department of Transportation (NCDOT) engineers made an initial assessment of Highway 12 on both Ocracoke and Hatteras Islands. They found two 500 foot sections of road on Ocracoke Island buckled and broken. Engineers said these will take some serious repair work. NCDOT employees and contractor crews are also working to clear sand and water that is covering other parts of Highway 12.

There are currently over 25 other roads either closed or partially closed due to weather damage that NCDOT officials are evaluating and it may be over a week before officials can get out to make damage assessments and estimate what repairs are needed.

NCDOT spokesman Andrew Barksdale said all of the estimates are just that and there is no definite way to determine how long the roads will be closed until inspectors are able to assess the closures and determine the extent of damage.

“Those are only our best guesses as to when the roads will re-open,” Barksdale said. “We can’t get inspectors to the various sites until the flood water recedes. Then they can take a look and see if there’s damage to the roadbed, deteriorating pavement or other things that might cause the closure to continue.”