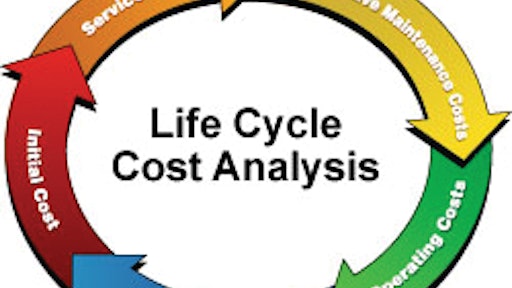 The National Asphalt Pavement Association has released a report on life-cycle cost analysis procedures which examines in depth the concept of the material-specific discount rate. "Material-Specific Discount Rate: Inappropriate for Life-Cycle Cost Analysis" (NAPA Special Report 203) outlines standard and customary life-cycle cost analysis models. It also shines a light on a “material-specific discount rate,” which is being promoted by the cement and concrete industries.

NAPA’s report reveals that the material-specific discount rate is not a concept economists use or accept. Instead, it was suggested in a 2011 report as a computational work-around by the Concrete Sustainability Hub (CSH). The CSH, located at the Massachusetts Institute of Technology, is funded by the Portland Cement Association and the National Ready Mixed Concrete Association.

The CSH report is being used to support legislation in Congress mandating the use of a material-specific discount rate in life-cycle cost analyses when comparing alternative designs for publicly funded projects, including pavements, bridges, and buildings. If adopted, a material-specific discount rate could skew life-cycle cost analyses for construction materials, including asphalt, concrete, steel, wood, and plastics.

“NAPA opposes asking Congress to mandate a life-cycle cost procedure which is not accepted by economists and which tilts the playing field in favor of one construction material,” said Mike Acott, NAPA President. “NAPA supports the use of life-cycle cost analysis by engineers who are charged with managing public dollars. What we do not support is the idea that Congress should become the engineering arm of government.”

NAPA’s report points out that life-cycle costing is already standard practice in state departments of transportation, and that the Federal Highway Administration has in place a well-vetted LCCA– MORE –procedure. The material-specific discount rate promoted by the concrete and cement industries would be an unwarranted departure from the accepted practices of economists.

NAPA agrees that periodic review of LCCA procedures is wise, so long as such reviews are conducted by knowledgeable economists in consultation with industry experts.

Additionally, the NAPA study finds that the use of material-specific discount rates is not accepted as a valid practice in economics; that the CSH model makes an unsupportable leap in attempting to use short-term price information to calculate future inflation over periods as long as half a century; and that it applies inaccurate and overly simplistic calculations when determining the standard bill of goods for construction of a highway.

The special report and a fact sheet summarizing the issue were released at the NAPA Annual Meeting in Palm Desert, Calif. Copies and a summary of the research are available from the NAPA Web site at www.asphaltpavement.org/SR203.

The Simple, Plain, and Even Interesting Truths About Life-Cycle Cost Analysis for Concrete Pavements

State departments of transportation are getting $10 billion in long-awaited emergency aid from a $900 billion COVID-19 relief measure passed by Congress late on December 21 as part of a final year-end legislative package.
December 22, 2020
Follow Us