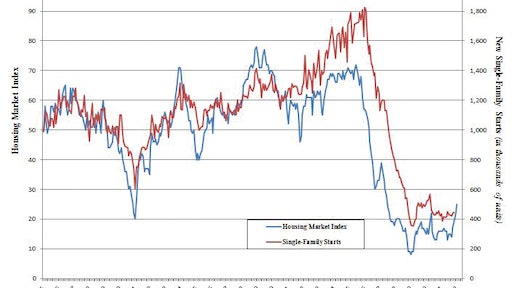 The NAHB/Wells Fargo Housing Market Index has been climbing much more steeply than housing starts for the past four months.

Builder confidence in the market for newly built, single-family homes climbed for a fourth consecutive month in January, rising four points to 25 on the NAHB/Wells Fargo Housing Market Index (HMI). It is the highest index reading since June 2007.

“Builder confidence has now risen four months in a row, with the latest uptick being universally represented across every index component and region,” noted Bob Nielsen, chairman of the National Association of Home Builders (NAHB) and a builder from Reno, Nev. “This good news comes on the heels of several months of gains in single-family housing starts and sales, and is yet another indication of the gradual but steady improvement beginning to take hold in an increasing number of housing markets nationwide -- and that has been shown by our Improving Markets Index. Policymakers must now take every precaution to avoid derailing this nascent recovery.”

“Builders are seeing greater interest among potential buyers as employment and consumer confidence slowly improve in a growing number of markets, and this has helped to move the confidence gauge up from near-historic lows in the first half of 2011,” noted NAHB Chief Economist David Crowe. “That said, caution remains the word of the day as many builders continue to voice concerns about potential clients being unable to qualify for an affordable mortgage, appraisals coming through below construction cost, and the continuing flow of foreclosed properties hitting the market.”

Derived from a monthly survey that NAHB has been conducting for more than 20 years, the NAHB/Wells Fargo Housing Market Index gauges builder perceptions of current single-family home sales and sales expectations for the next six months as “good,” “fair” or “poor.” The survey also asks builders to rate traffic of prospective buyers as “high to very high,” “average” or “low to very low.” Scores from each component are then used to calculate a seasonally adjusted index where any number over 50 indicates that more builders view conditions as good than poor.

Number of Improving US Housing Markets Expands for Third Month