'While builder confidence remains low, consistent gains . . . are an indication that pockets of recovery are slowly starting to emerge' 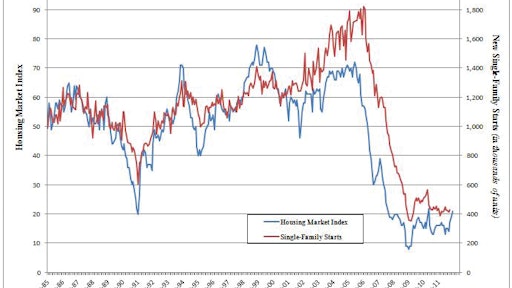 Builder confidence in the market for newly built, single-family homes edged up two points to 21 on the National Association of Home Builders/Wells Fargo Housing Market Index (HMI) for December, released today. This marks a third consecutive month in which builder confidence has improved, and brings the index to its highest point since May of 2010.

"While builder confidence remains low, the consistent gains registered over the past several months are an indication that pockets of recovery are slowly starting to emerge in scattered housing markets," said Bob Nielsen, chairman of the National Association of Home Builders (NAHB) and a home builder from Reno, Nev. "However, the difficulties that both builders and buyers continue to experience in accessing credit for new homes are holding back potential sales even in areas where economic conditions are improving."

"This is the first time that builder confidence has improved for three consecutive months since mid-2009, which signifies a legitimate though slowly emerging upward trend," said NAHB Chief Economist David Crowe. "While large inventories of foreclosed properties continue to plague the most distressed markets and consumer worries about job security and the challenges of selling an existing home remain significant factors, builders are reporting more inquiries and more interest among potential buyers than they have seen in previous months."

Derived from a monthly survey that NAHB has been conducting for more than 20 years, the NAHB/Wells Fargo Housing Market Index gauges builder perceptions of current single-family home sales and sales expectations for the next six months as "good," "fair" or "poor." The survey also asks builders to rate traffic of prospective buyers as "high to very high," "average" or "low to very low." Scores from each component are then used to calculate a seasonally adjusted index where any number over 50 indicates that more builders view conditions as good than poor.

Builder confidence primarily gained strength in the South in December, where a four-point gain to 25 brought that region's HMI score to its highest level since March of 2008. A one-point gain to 16 was registered in the West, while the Midwest held unchanged at 24 and the Northeast slipped one point to 15.