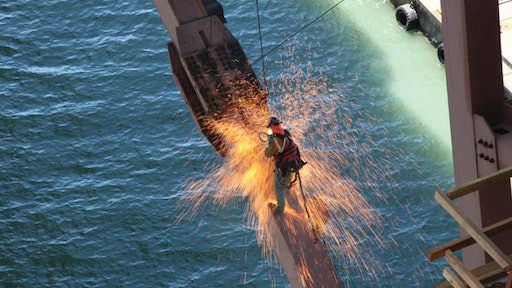 The Grand Prize was awarded to California Department of Transportation Engineer Martin Chandrawinata for his photograph of an iron worker using a cutting torch while suspended from the San Francisco-Oakland Bay Bridge.

Two spectacular photographs taken of laborers at work on prominent sections of the San Francisco-Oakland Bay Bridge won the Grand Prize and the People's Choice Award in the Faces of Transportation competition sponsored by the American Association of State Highway and Transportation officials.

Twenty-eight transportation department employees from 21 states and six private citizens submitted 121 photographs in the competition. The entries were judged in three categories: Building the Future, Opening Communities, and Taking the Road Less Traveled.

The Grand Prize was awarded to California Department of Transportation Engineer Martin Chandrawinata for his photograph of an iron worker using a cutting torch while suspended from the San Francisco-Oakland Bay Bridge.

The People's Choice Award was presented to photographer Bill Hall who captured California Department of Transportation Engineer Matt Bruce inspecting the cable band installation near the top of the San Francisco-Oakland Bay Bridge.

Building the Future -- Individual Winner: California State Route Four Construction through Contra Costa County -- photographer Karl Nielsen captured an unknown worker as he cut through reinforcing rebar in the concrete rubble of a demolished bridge on State Route Four in Antioch, Calif. The bridge was demolished to make room for the widening of the highway and the addition of a light rail system.

Opening Communities -- Individual Winner: New River Gorge US 19, West Virginia -- photographer Michael Ruggiero, Jr. set out to document semi-truck drivers, a sub-culture of gritty characters that drive coast-to-coast on the Interstate highways. This photograph is from his book "Over the Road."

The photographs were judged by Connie Rus, an accomplished photographer and graphic designer based in Washington State.