Acott was honored on Wednesday, Feb. 5, at a ceremony during the association’s 59th Annual Meeting in Boca Raton. 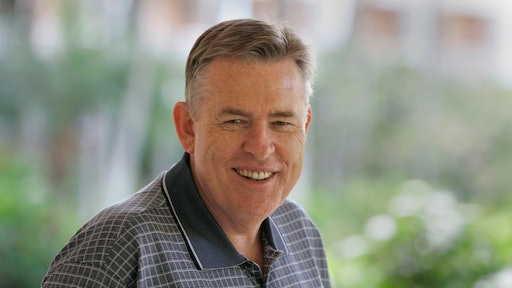 The National Asphalt Pavement Association (NAPA) announced today that Mike Acott, president of NAPA, is the 2013 inductee to the Asphalt Pavement Hall of Fame. Acott was honored on Wednesday, Feb. 5, at a ceremony during the association’s 59th Annual Meeting in Boca Raton, FL.
The Asphalt Pavement Hall of Fame was established to recognize and honor individuals who have made significant and lasting contributions of regional and/or national importance to the asphalt industry and whose work has led to innovations in the production and placement of asphalt, the usage of asphalt as a paving materials, and/or the general advancement and recognition of the industry.
“The Asphalt Pavement Hall of Fame is pleased to recognize Mike Acott for his outstanding leadership and for his many contributions to the asphalt industry,” said John Keating, 2013 Chairman of the NAPA Board of Directors. “He has been an ambassador for the asphalt industry on the national level for nearly four decades.”
Born and educated in England, Acott first worked at the Transport and Road Research Laboratory for the sand and gravel industry before moving to South Africa in the early 1970s to work as a research engineer for the South African National Institute for Transportation and Road Research. Acott also worked with Mobil Oil’s bitumen operations and managed a road construction subsidiary in the country. While in South Africa, he earned his Master of Science in Civil Engineering, focusing his thesis work on the use of foamed asphalt.
In the mid-1980s, Acott relocated to the United States to join the National Asphalt Pavement Association as its Executive Director and in 1992 he became President of the association. During his time at NAPA, Acott has been a tireless advocate for innovation
in asphalt pavements before the industry, government, and academia. He has encouraged strategies that result in continued improvement in the workplace for asphalt workers and in asphalt’s long-term sustainability.
Acott has directed the launch of national initiatives on Perpetual Pavements, stone-matrix asphalt, large-stone mixtures, rubblization, and warm-mix asphalt. He has sought the input of contractors, the Federal Highway Administration, state departments of transportation, and the state asphalt pavement associations throughout his career and has helped guide the successful deployment of these innovations.
He has also worked cooperatively with counterparts at asphalt pavement associations around the world to spread knowledge and innovation. As chairman of the Global Asphalt Pavement Alliance until 2013, Acott facilitated the transfer of technologies across international borders to the benefit of asphalt producers in the United States and beyond.
For potentially divisive issues surrounding asphalt fumes and silica, Acott insisted upon a transparent, collaborative approach that involved industry, labor, government, and academia. This approach lead to a favorable IARC classification of asphalt fumes for the asphalt pavement industry and has been recognized as a model for successful partnering between regulators and industry. In 1999, the engineering controls partnership for asphalt paving machines received the first-ever National Occupational Research Agenda Partnering Award for Worker Health and Safety from NIOSH.
Acott has long been considered one of the asphalt pavement industry’s strongest voices. He continues to work to build knowledge and to accelerate the deployment of new technologies both in the United States and around the world. His significant contributions and leadership have been an outstanding benefit to NAPA and the asphalt pavement industry as a whole.