Federal revenues for highway funding have fallen short of expenditures for more than a decade, and state funding fell 25% from 2003 to 2011 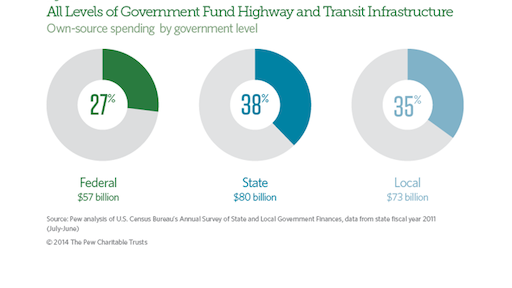 Roads, bridges, and transit are funded through a partnership of the federal government, states, and localities. Over the past 10 years, all levels of government have experienced challenges in funding transportation infrastructure. Revenue for the highway trust fund, the source of most federal funding for the country’s roads and transit infrastructure, has fallen short of expenditures for more than a decade.

These gaps are expected to continue growing in future years. To date, the federal government has made up the difference through a combination of drawdowns from trust fund balances and, starting in 2008, transfers from the general fund. The Congressional Budget Office projects that, by the latter half of 2014, balances in the trust fund will be so low that payments to states and localities may need to be delayed and that in fiscal year 2015, balances will be completely exhausted.1 And the challenges extend beyond the federal level; state funding for roads and transit fell by one-fourth in real terms between 2003 and 2011.

The federal and state governments are having difficulty maintaining transportation investments in large part because they rely heavily on the gas tax, a declining revenue source, to pay for road and transit infrastructure. This revenue has fallen substantially in real terms across all levels of government over the past decade as a result of changing driving habits and increased fuel efficiency. In addition, federal and many state gas taxes remain a fixed amount per gallon, even as transportation construction costs increase. This means that the revenue generated by each gallon of gas doesn’t go as far as it did in the past in paying for transportation needs.

Ultimately, understanding the nation’s transportation funding challenges requires recognizing the role that each level of government plays in supporting this critical infrastructure.