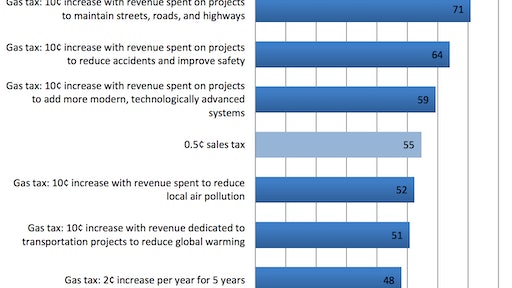 The survey results show that a majority of Americans would support higher taxes for transportation—under certain conditions (Figure 1). While only 31% of respondents supported the base-case 10¢ per gallon gas tax increase, five variants that devoted revenue to specific uses received at least 50% support, as did the proposal for a new national sales tax.

Seventy-one percent of U.S. residents would support a 10-cent increase in the 18.4 cents-per-gallon gas tax that is used to pay for federal transportation projects, according to a new poll released this week.

Support for increasing the gas tax to 28 cents per gallon drops to 31% if the money is used to "maintain and improve the transportation system" instead of "improve road maintenance," according to the group.

Are Offshore Taxes the Only Way to Pass the Highway Bill?

A Few Facts about the Gas Tax