Dr. Brock believed in training his employees and educating his customers, and a number of Astec companies have state of the art facilities dedicated to training and innovation due to his belief in lifelong growth and improvement. 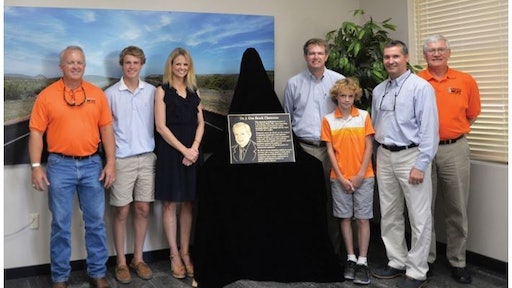 Last, the National Center for Asphalt Technology (NCAT) dedicated its main training classroom to the memory of J. Don Brock, Ph.D., P.E., whose knowledge and leadership transformed the asphalt pavement industry and helped turn the vision of NCAT into a reality. He was the chairman of NCAT’s Applications Steering Committee from 1993-1998 and served on NCAT’s Board of Directors.

Dr. Brock was a great leader and advocate for improving asphalt pavement construction. He founded Astec Industries in 1972 and built it into a billion-dollar family of companies including 18 subsidiaries and employing over 4,000 globally (including 350 engineers).

“Astec was a founding major contributor to the endowment to support NCAT, but Don continued to faithfully give so much of his time, energy, and resources to help NCAT accomplish its mission.” says NCAT Director Randy West at the dedication.

During his career, Dr. Brock was the recipient of numerous awards due to his ingenuity, integrity, humility, and constant commitment to his work. An innovator who tirelessly sought to advance asphalt recycling and construction quality, he held over 100 U.S. and foreign patents for construction equipment.

“Don was a strong supporter of NCAT from its beginning,” stated NCAT Director Emeritus Dr. Ray Brown. “He had the ability to identify issues facing the asphalt industry and provided general guidance to help NCAT address these issues. It is fitting that the classroom has been dedicated to Don Brock, as he insisted that the classroom be included as a part of our facility. He was a very good friend of mine and will be missed very much.”

Dr. Brock believed in training his employees and educating his customers, and a number of Astec companies have state of the art facilities dedicated to training and innovation due to his belief in lifelong growth and improvement. Astec has over 23,000 square feet dedicated to training at its Chattanooga, TN facility alone.

Dr. Brock was chairman of the board and CEO of Astec Industries until 2014, when his son Ben became President and CEO of the company. Ben Brock attended the dedication with his wife, Carolyn and their two sons, Garrison and Pierce. Members of NCAT’s staff and board of directors were also in attendance.