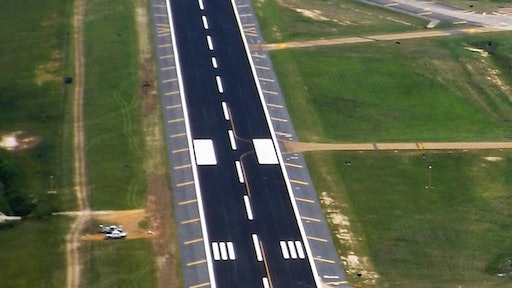 The National Asphalt Pavement Association (NAPA) announced that Tarver Land Development of Alexandria, LA, has won the 2015 Ray Brown Airport Pavement Award for excellence in construction of an asphalt airport pavement. The company received its award at a ceremony during the association’s 61st Annual Meeting in La Quinta, CA.

Tarver Land Development won the award for the resurfacing of the runway at Polk Army Airfield. Jarred Tarver, chief executive officer of Tarver Land Development, said 4 inches was milled from the existing runway and replaced with 2 inches of an asphalt binding course and 2 inches of an asphalt wearing course. Specifications required a PG 64−22 mix design but the company choose to upgrade the liquid asphalt to PG 76−22.

The original PG 64−22 mix was a broad spectrum mix design that the U.S. Army used throughout Fort Polk — whether it was paving a parking lot or a runway, said Tarver. “For what they were looking for from the airfield, we wanted to make sure the product was something we could stand behind,” he said. “They land some big planes out there, and it’s not just like driving a truck over it. We wanted to make sure we were providing top quality.”

Capt. Richard Jordan, Project Engineer with the U.S. Army Corps of Engineers (USACE), said the airstrip was last paved 4–5 years ago, but with its constant use — 1,500 landings per year — it was time for a new surface. “Due to all the training rotations, each month we have a new unit come in, and the aircraft that comes with it, so it definitely gets a lot of use,” he said.

Tarver Land Development received USACE approval to start on the project on Mar. 27, 2015, with the requirement that work be finished by May 1. Daily paving operations were limited to daylight hours.

The 4,080-foot runway was milled in four days using two 12-foot milling machines. Tarver Land Development then placed a test section for the USACE. Once the material was approved, Tarver immediately began paving roughly 1,200 tons a day for the binding course.

The company had a self-imposed goal of placing no transverse joints on the wearing course to ensure a smooth, top-quality overlay. “On the second lift we went for two passes just to ensure that we didn’t leave any transverse joints,” said Tarver. “We went from end-to-end. We knew that would give the best-quality project.”

Tarver Land Development synched its paving train with the asphalt plant to manage daily operations for the project. Due to security restrictions associated with working on base, as well as delays from on-base traffic, this helped pace the timing of material delivery to ensure that work was finished during daylight hours.

With two months to plan, this process was aided by Tarver Land Development requiring 18 of its truck drivers to enroll in and secure approval from RAPIDGate, a private company that offers background checks to facilitate access to secure locations, such as military bases. Still, there was no working around Tarver Land Development’s 9- to 10-mile haul and limited access to the site through only two gates.

In the end, the project was successful and the runway yielded an IRI of 37.9 and a profile index average of 0.24, meeting the project smoothness specifications. Additionally, the overall mat density and joint specific densities had no failures.

The Ray Brown Airport Pavement Award is presented each year to the highest-rated airport project submitted for a NAPA Quality in Construction Award, which recognize asphalt pavements of excellence. The award is named for Ray Brown, who served many years as Director of the National Center for Asphalt Technology at Auburn University in Auburn, Ala.