Second quarter gross domestic product growth beat consensus forecasts but data is not encouraging. Here’s what it might mean for interest rates 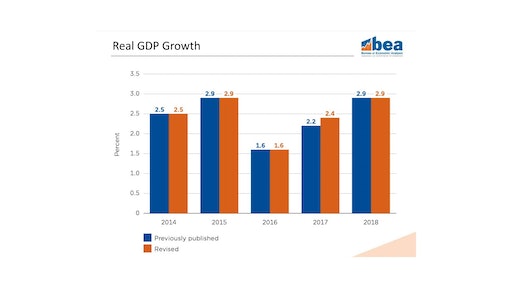 The 2.3% average annual economic growth of the current decade-long expansion compares with 2.9% during expansion from late 2001 to 2007, and 3.6% in the 10-year expansion ended in early 2001.
Bureau of Economic Analysis

The Wall Street Journal reports that the Commerce Department’s revisions to gross domestic product data showed GDP in the fourth quarter of 2018 grew 2.5% compared to a year earlier, sharply down from the most recent estimate of 3%.

Revisions, incorporating some new and more complete data, also show the economy grew more slowly than previously reported in Q2 2018 – at a 3.5% annual rate rather than 4.2%.

The economy has grown 2.3% per year on average through this expansion, but President Trump promised to boost the rate to 3% or more through tax cuts, deregulation and tougher trade policy. The Trump administration’s budget had projected growth of 3% in calendar 2018, and Republicans justified 2017’s Tax Cuts and Jobs Act on growth rates in that range.

Reuters reports downward revisions to 2018 figures largely reflected downgrades to business investment, suggesting corporations likely did not plow their tax windfall back into their businesses.

“In our view, today’s GDP print has very few implications for the FOMC (Federal Open Market Committee) meeting on July 31,” said Wells Fargo’s Bryson. “Although the outturn was slightly stronger than expected, we still look for the FOMC to cut its target range for the fed funds rate 25 bps. Looking forward, we expect that real GDP will continue to grow between 2% and 2.5% in coming quarters. That said, inflation continues to run below the Fed’s target of 2%, and the FOMC seems to be concerned about some of the uncertainties related to trade and other geopolitical factors that cloud the economic outlook. Many members of the FOMC seem to be taking the view that it should probably take out a few ‘insurance’ rate cuts at this time, especially in an environment in which high inflation simply is not a problem.”