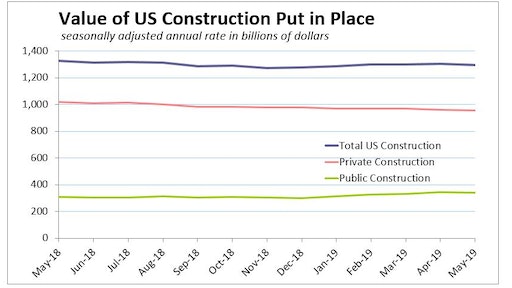 Private and public construction spending both slid in May on continued single-family residential and commercial construction decline, plus a 3.2% turn-down in highway and street spending.
Data: U.S. Department of Commerce

U.S. construction spending unexpectedly fell in May as investment in private construction projects dropped to its lowest level since January 2017.

The Commerce Department’s monthly estimates of the value of construction put in place showed May construction spending declined 0.8%, the biggest drop since November. Data for April was revised to show construction outlays rising 0.4% instead of being unchanged as previously reported. 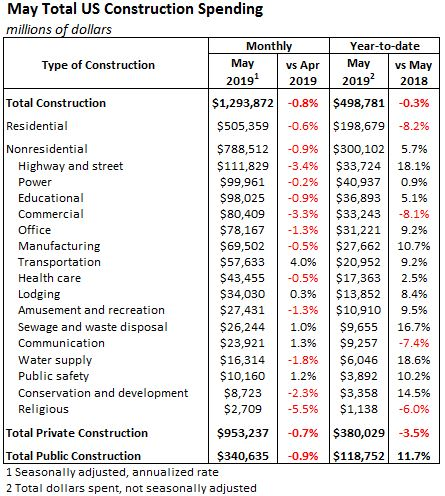 Spending in the most valuable construction segments all turned down in April, joining the months-long slide in single-family housing and commercial construction.Data: U.S. Commerce Department

CNBC reports that economists’ consensus forecast construction spending would rise 0.1% in May. The total value of construction since the first of 2019 is 0.3% below the first five months of 2018.

Multifamily residential construction spending stood out with a 1.9% rise in May, its third consecutive monthly gain. Apartment and condo building continues to surpass expectations and is up 8.9% year-to-date. 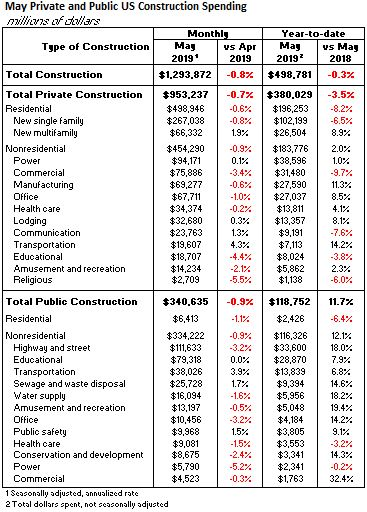 Nonresidential spending has grown a substantial 5.7% year-to-date but delivered its first monthly decline of the year, sliding 0.9% in May.

One nonresidential segment is a significant source of difficulty. The vast commercial segment fell 3.4% in May. Total commercial construction spending year-to-date has plunged 9.7% below that of the same period in 2018.

Weak construction spending was the latest indication that U.S. economic growth slowed in the second quarter after getting a temporary boost from exports and an accumulation of inventory.

Consumer spending is rising moderately, while the pace of job and wage growth has slowed. In addition, manufacturing and the housing market are struggling and the goods trade deficit widened in May.

10 States Make Up 60% of Current US Construction Project Pipeline

May Nonresidential Construction Spending up Compared to 2018 Level