“The last four consecutive months, firm billings have either decreased or been flat, the longest period of that level of sustained softness since 2012.” 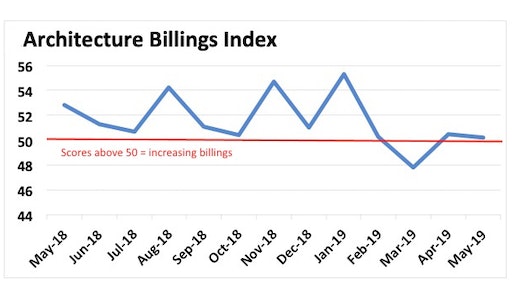 Architecture billings appear to be stabilizing just above the 50 threshold, where billings are still increasing. Scores below 50 indicate diminishing billings.
American Institute of Architects

Demand for design services in May remained essentially flat in comparison to the previous month, according to a new report from The American Institute of Architects (AIA).

AIA’s Architecture Billings Index (ABI) score for May showed a small increase in design services at 50.2, which is slightly down from 50.5 in April. Any score above 50 indicates an increase in billings.  Both the project inquiries index and the design contracts index softened in May but remained positive. The project inquiries index came in at 56.2, down from 60.9 the previous month. The design contracts index registered at 50.9, down from 52.1.

“The last four consecutive months, firm billings have either decreased or been flat, the longest period of that level of sustained softness since 2012,” said AIA Chief Economist Kermit Baker, PhD, Hon. AIA. “While both inquiries into new projects and the value of new design contracts remained positive, they both softened in May, another sign the amount of pending work in the pipeline at firms may be starting to stabilize.”

By sector, mixed practices led for the month of May at 55.4, and increase from its April reading of 53.2. It was followed by commercial/industrial at 53.0, which increased nearly seven points compared to its 46.6 April reading. Institutional registered at 48.0, a drop from 49.2 last month. Finally, multifamily residential dropped from 47.4 in April to 46.0 in May.