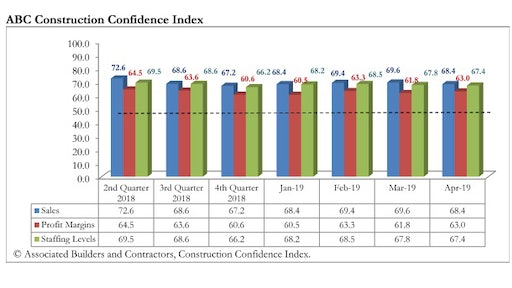 Despite ongoing concerns about skilled worker shortages and volatile materials prices, construction executives remain bullish about the prospects for the nonresidential construction sector, according to Associated Builders and Contractors’ April 2019 Construction Confidence Index.

All three principal components measured by the survey — sales, profit margins, and staffing levels — remain well above the diffusion index threshold of 50, signaling ongoing expansion in construction activity. While contractors are slightly less upbeat regarding sales expectations and staffing levels than in March, more than 70% of contractors expect sales to increase over the next six months, a reflection of continued elevated demand for construction services. Consistent with last month’s reading, more than 56% of survey respondents anticipate rising profit margins, an indication that users of construction services remain willing to pay more to get projects delivered despite rising wages and other cost pressures.

“Many economists are convinced that the next recession will begin next year,” said ABC Chief Economist Anirban Basu. “While that is a possibility, there are presently no signs of recession in the nonresidential portion of the economy, as backlog remains elevated and demand for construction services continue to rise, especially in public construction segments such as water supply, flood control and highway/street. 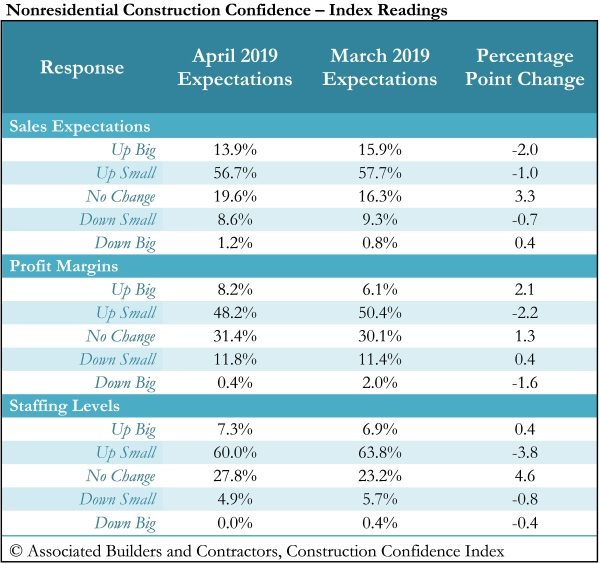 Associated Builders and Contractors“Remarkably, despite growing shortages of skilled workers and rising compensation costs, the average nonresidential contractor has been able to keep profit margins stable, with a significant proportion able to increase margins slightly,” said Basu. “With bidding opportunities remaining robust and firms still in a position to chase opportunities to bolster revenues and profitability, it comes as little surprise that many contractors continue to hire. ABC’s most recent survey indicates that many more firms expect to expand payrolls in the coming months.

“With the Federal Reserve now actively contemplating rate cuts, construction firms may experience additional support in the form of stepped-up demand,” said Basu. “Presumably a rate cut or two in 2019 would further diminish the cost of capital, positioning more projects to move forward. On the other hand, there is evidence that the U.S. economy has begun to slow, with the pace of job growth slowing recently along with more sluggish indications from measures such as industrial production and capacity utilization. Should the U.S. economy continue to slow through the balance of 2019 and into 2020, it would likely translate into meaningfully softer demand for construction services by 2021 or 2022.”