10 States Make Up 60% of Current US Construction Project Pipeline

California, Texas and New York are among the states with the highest value of construction projects in the pipeline 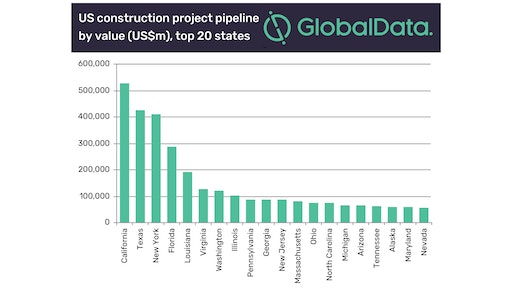 GlobalData’s latest report: ‘Project Insight - Construction in Key US States’ reveals that California, Texas and New York are among the states with the highest value of construction projects in the pipeline. With a total of 1,302 projects worth $524.6 billion, California, for example, has both the largest number and value of projects in the U.S. construction project pipeline, with infrastructure projects and mixed-use developments, representing a combined 56% of California’s total pipeline value.

Dariana Tani, Economist at GlobalData explains: “The construction of mixed-use developments is booming across many U.S. states, with the building of American city centers and suburbs coming to resemble one another due to changing demands from consumers and homebuyers. This is particularly the case for states such as Florida, California and New York. In Florida, the construction of mixed-use properties is growing faster than any other U.S. state, with five of the top 10 largest construction projects in Florida being mixed-use construction projects, according to GlobalData.”

The desire to live, work, shop and play within walkable distances is not only unique to millennials and baby boomers but also older generations who want to live in well-connected urban communities.

*These projects are at all stages of development from announcement to execution.