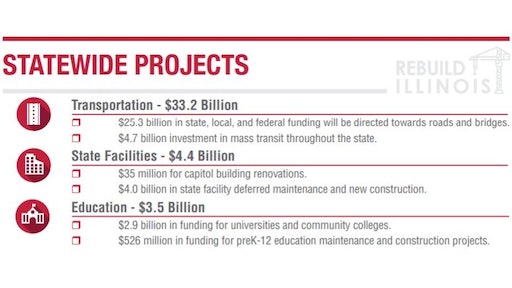 Governor JB Pritzker signed into law the $45 billion Rebuild Illinois plan, the most robust capital improvement program in Illinois history and the first in nearly a decade.

The historic plan was passed by bipartisan supermajorities and will invest $45 billion in roads, bridges, railways, universities, broadband internet access, early childhood centers and state facilities like the crime lab and veterans' homes over the next six years. The office of the governor says the projects will create an estimated 540,000 jobs over the life of the plan. 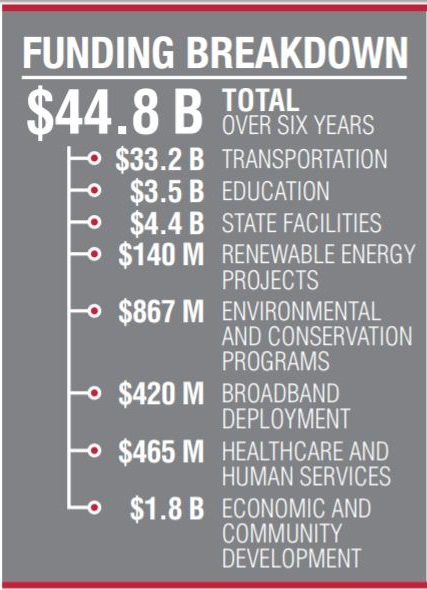 Rebuild Illinois makes critical investments in infrastructure across the following areas, many of which will be subject to a rigorous process for determining projects and providing grants:

More than $14 billion for new roads in bridges:

$4.7 billion for mass transit, including the RTA (CTA, Metra and Pace)

$1 billion for passenger rail, including Amtrak and other inter-city rail projects

$679 million for other transportation projects

$4 billion for deferred maintenance and new projects at state facilities

$350 million for the State Capitol

$867 million for environmental, conservation and recreation projects, including:

$140 million for renewable energy projects, including solar and energy efficiency upgrades at state facilities and transportation electrification in low-income communities

$200 million for hospital and healthcare transformation

$112 million for education and scientific facilities

$50 million for the arts

$25 million for an apprenticeship program

SB 1939 provides revenues to fund the horizontal projects in the Rebuild Illinois capital plan. It increases the motor fuel tax, which is sent to lockbox that exclusively funds critical transportation projects across the state:

This increase will result in an additional $400 million per year to local governments (municipalities and local road districts) for local roads and bridges, $250 million to transit districts, and $590 million to the state in FY20.

Sales tax shift: Beginning in FY22, one-fifth of the net 5% state sales tax on motor fuel purchases will shift per year from deposit into the General Funds to the Road Fund, with the full amount deposited into the Road Fund by FY26. This will result in $600 million annually at full implementation (shift of revenue only, not an increase).

HB 142 provides $22.6 billion in additional bonding authority, which will allow the state to fund much needed improvements in infrastructure in every region of the state. HB 142 increases that authority to $60.8 billion.