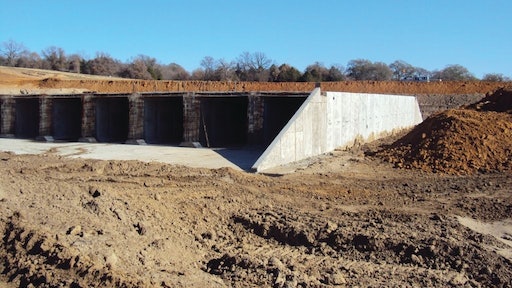 Expansion of the Turlington Mine, located near Fairfield, Texas, between the Trinity River and Fairfield Lake, used box culverts to allow groundwater to flow naturally, but the structures had to be designed to support the heavy dragline excavators moving around the mine. Hanson Pipe & Precast provided more than 2,560 linear feet of 10- by 9-foot reinforced precast concrete box culverts.

"Hanson's Houston facility was the best choice for this project because of its convenient distance from the project site as well as its ease of rapid production," said Mark Carpenter of Hanson Pipe & Precast. "Our Houston facility was able to produce approximately 400 reinforced precast concrete boxes in only 37 days."

"State Highway requirements allowed only one section of the product to be delivered per truck load, as the weight of each section was 18.29 tons," said Carpenter. "Still, we were able to work together to develop a plan and complete all deliveries well ahead of schedule."

Over the course of three months, Hanson delivered all of the products for the Turlington Mine project.

Both drainage structures began with approximately four feet of ground cover and were built up to as much as 24 feet of cover as the project progressed. The expansion project was completed in 2011 and the mine is currently in operation.