A design-build project team completes the fastest delivery of a modern federal courthouse in only 27 months in Billings, Mont. 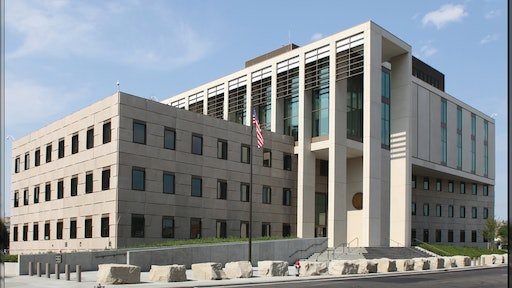 It only took 27 months for the design-build team to complete the Billings, Mont., federal courthouse which incorporated Building Information Modeling and LEED elements in the design and construction.

The new federal courthouse in Billings, Mont., is open for business after only 27 months of design and construction. According to the U.S. General Services Administration (GSA), which manages real estate and property for the federal government, the design-build project team of Mortenson Construction and NBBJ established a new benchmark for the fastest delivery of a modern federal courthouse. The formal building opening and dedication is scheduled for September 18, 2012.

The team achieved the expedited design and construction through a variety of practices and technologies geared toward construction efficiency, such as Building Information Modeling (BIM). Through the use of BIM, the design and construction team were able to maximize user understanding of the design, safety and quality while saving time and money. "We avoided $33,500 worth of re-work by using BIM for the coordination of the building enclosure alone," said Jim Yowan, vice president, Mortenson Construction.

The new courthouse includes three courtrooms, four judge's chambers, prisoner areas, and office and public spaces. It encompasses 128,742 square feet on a 1.8-acre site near the center of the city of Billings. In addition to the courts, the new building houses the Clerk of Court, U.S. Probation Office, U.S. Marshals Service, U.S. Attorney's Office and General Services Administration. Construction began in October 2010 and was funded with $79 million through the American Recovery and Reinvestment Act (ARRA) of 2009.

Four key concepts informed the design: federal expression, regionalism, visible justice and high performance. The courtrooms have been placed at the top of the building, representing the idea of "visible justice," and the civic significance of the judicial process.

Natural elements are reflected throughout the space, with large windows on the west side providing natural light and expansive views of downtown Billings. The building features rugged precast panels to reflect the landscape around Billings while supporting the two courtroom floors. The fourth floor extends out onto a large rooftop patio, which is landscaped with shrubs and trees. As a tribute to the Blackfeet Nation, American Indian themes are introduced throughout, including a tepee motif and a tepee village scene.

The building is designed to be at least 30 percent more energy efficient than the industry standard and has already achieved an energy cost savings of more than 40 percent. High performance strategies were incorporated throughout, including radiant heating and cooling, a super-insulated exterior wall system with triple glazing and shading on the west facade lobbies, and a closed cooling tower. The courthouse is on track to achieve LEED-Silver certification.

International Journal of Construction Education and Research Focuses on BIM

Building for GSA May Soon Require Building with BIM