To prevent accidents on wet pavement, Ottawa International Airport decided to groove the pavement on its two major runways 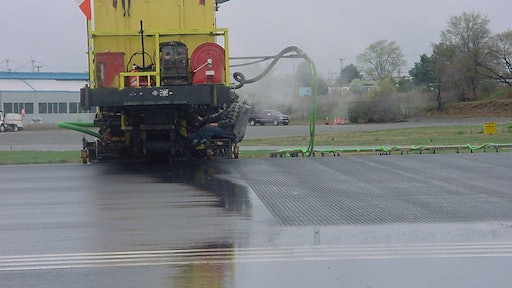 Completing groove pavement at Canada's Ottawa International Airport, one of Canada's busiest airports and the first major airport in Canada to have grooved pavement

One of Canada’s busiest airports has completed a grooving operation on one of its two main runways. The project, Runway 07/25 at Ottawa International Airport - which serves a large metropolitan area and is Canada’s sixth busiest airport - is the smaller of the airport’s two major runways. The existing surface of the runway consisted of pavement that was crowned for drainage. With wet pavement conditions a major contributing factor, the airport became an ideal candidate for implementing runway grooving.

The runway is 8,000 by 200 feet, and the project consisted of adding a standard runway grooving configuration of 0.25-inch groove width by 0.25-inch groove depth, spaced 1.5 inches center to center, to the pavement for the entire length of the runway.

Ten days of runway shutdown were scheduled, with crews working 24 hours a day to complete the job. “We finished ahead of schedule, with only six actual grooving days,” said Philip Zuzelo, president, Cardinal/International Grooving and Grinding, LLC, the company that performed the grooving operation for Ottawa International. Because the airport only has two major runways, this helped keep disruptions to a minimum. As a matter of necessity, work on runway intersections causes a complete airport shutdown, so crews worked on these areas at night, when no commercial flights were scheduled.

Runway 07/25 had been resurfaced in 1994 and was constructed according to guidelines set forth by Transport Canada, operator of the airport at the time. Construction completed in the summer of 2013, however, brings it into conformance with standards set out by the International Civil Aviation Organization (ICAO) and the United States Federal Aviation Authority (FAA).

Since the early 1970s, the FAA has recommended grooved runways as the preferred surface to reduce hydroplaning related accidents. According to FAA AC 150/5320-12C, “Cutting or forming grooves in existing or new pavement is a proven and effective technique for providing skid resistance and prevention of hydroplaning during wet weather… [It is] considered high priority safety work.” In situations where grooving has not been accomplished during initial construction, the document recommends considering it for runways that have a history of aircraft hydroplaning, a high rate of annual rainfall or rainfall of high intensity, among other factors.

Grooving on the larger runway is scheduled for next year.