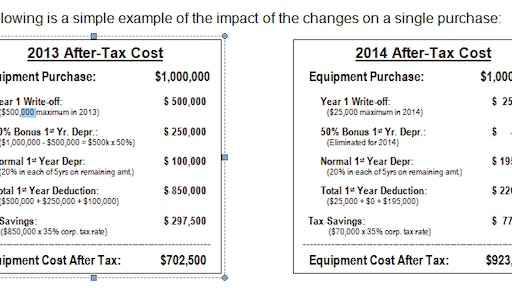 Here's a simple example of the impact of the changes on a single purchase.

As most equipment distributors know, some big changes to the tax code are scheduled for 2014, which both increase taxes payable on equipment sales and reduce the offsetting tax breaks historically available on replacement purchases.

Section 1031 “like-kind exchange” treatment for sales of used/depreciated equipment may also be eliminated or substantially curtailed (it is not yet clear whether Congress will take this additional step, but “everything is on the table”). So, even some of the oldest and most commonly relied upon means of limiting taxes arising in connection with replacing equipment fleets may be eliminated.

In addition, the long-term capital gains tax rate (recently increased from 15% to 20%), plus a new 3.8% “Obamacare” tax will apply to all gains on sales of used equipment. Thus, if you fully depreciate an asset, and then sell it in 2014 for $1,000,000, you’re going to pay capital gains tax of at least $238,000 (23.8%) - and perhaps much more after factoring depreciation recapture - with virtually no offsetting tax breaks. Adding to the pain is the fact that your estimated taxes for 2015 will also increase in proportion to the increased taxes you pay in 2014 (you may ultimately be able to claim a deduction or refund, but it will still negatively impact your 2015 cash position).

This effective “double-tax increase” will, of course, significantly reduce incentives for both rental operators and construction companies/contractors to replace their equipment fleets. Consequently, we expect them to reduce or delay purchases and limit sales of their used equipment to varying degrees in an effort to get another year or two out of those items that might, with some additional care and maintenance, survive and continue to generate revenues, at least until the current tax regime is rationalized and a measure of understanding regarding the importance of tax incentives is reincorporated, perhaps after the next election cycle. In the interim, the obviously negative impact on distributors will continue to be criticized by a wide range of industry participants.

By contrast, the equipment rental market, which is currently expected to grow at a rate of 8.6% annually between 2013 and the end of 2017 (just over 50% in the aggregate during that period), may see greater expansion as a result. The primary question now is whether rental fleets will be large enough to satisfy demand; an uncertainty that appears to be driving renewed interest not only in opening new rental outlets, but also in participating in the “re-rental” or “sub-rental” market (whereby an owner rents equipment to a rental store, which then “re-rents” it to the rental store’s customers). This may create an additional revenue opportunity (perhaps at higher-than-normal rental rates), both for distributors who don’t regularly participate in the equipment rental market and for those seeking to expand their presence in the rental industry without buying or opening completely new rental operations. But as noted below, you will want to make certain you have adequate insurance before proceeding.

What are your legal options?

For those dealers who elect to participate in the rental market, this also highlights some additional legal and financial issues:

The shifting tax environment continues to create new challenges (and opportunities) for distributors and rental operators. As is so often the case, however, this is yet another instance where good planning and preparation can create a significant competitive advantage for those who are properly prepared.

James R. Waite, Esq., is a corporate and commercial equipment leasing attorney with over 20 years of experience. He authored the American Rental Association’s book on rental contracts and is the owner of EquipmentRentalContracts.com. He has represented dozens of equipment rental companies throughout North America. He is also a veteran of the United States Air Force, has a BBA in Finance from the University of Texas at San Antonio, a Juris Doctor from St. Mary’s University, and an MBA from the Kellogg School of Management at Northwestern University in Evanston, IL.  He can be reached at (866) 582-2586, or via email at: J.Waite@wwlegal.net.

What to Tell Your Congressman to Save Important Tax Benefits