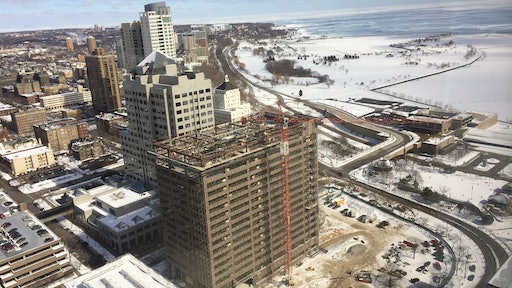 When Veit & Company Inc. won the bid to demolish a 20-story building in downtown Milwaukee the contractor had three challenges to face: demolishing the building in a top-down fashion when implosion was not an option, meeting the owner's goal of recycling 75 percent of the building materials and doing it all during the start of harsh winter weather. However, Veit was able to complete the demolition on time and even exceeded the project recycling goal by 18 percent - recycling 93 percent of the building materials.

Hines Interests LP, a Chicago-based developer, bid out the project to make way for the new 32-story Northwestern Mutual Life headquarters. Given its size, reputation and Milwaukee office location, Veit was included in the bidding process. Once prequalified, the company, along with three other national demolition firms, competitively bid for the project. Veit was awarded the job in October 2013.

Work began two months later, just as the harsh Milwaukee winter was beginning to take hold. The building, what Northwestern Mutual Life called its East Building, was demolished in a top-down fashion. This strategy was chosen for several reasons: 1) implosion was not an option due to the proximity of nearby buildings in a downtown environment; and 2) the owner had a goal of recycling 75 percent of the building materials.

Because of the building's height and the significant size of the structural members, Veit had to develop a plan to surgically remove the building, floor by floor, down to a level where the crew could safely remove the remaining portions of the building using heavy equipment. The crew — 25 during the surgical demolition — started by removing all exterior features such as landscaping, water features and skyways that connected the East building to the South and North buildings. Once this was accomplished, they erected a scaffolding system around the entire perimeter of the building, which included mobile material and personnel lifts. Once the tower crane and scaffolding were in place, the crew removed the building utilizing small equipment and labor. Each floor was scraped clean of all materials, and then the shell was removed. The tower crane was used to pick the steel members and lower them to the ground.

Time constraints required Veit to establish a demolition sequence that included five simultaneous activities occurring in different areas of the building. These included: floor removal, exterior curtain wall removal, preparation of the steel frame, picking of the steel frame and removal of scaffolding as each floor was demolished.

For the lower portion of the building demolition, Veit utilized the following equipment:

The demolition was successfully completed by August 2014. Veit worked more than 34,000 hours performing the industry's most dangerous work at high elevations without a lost time incident.