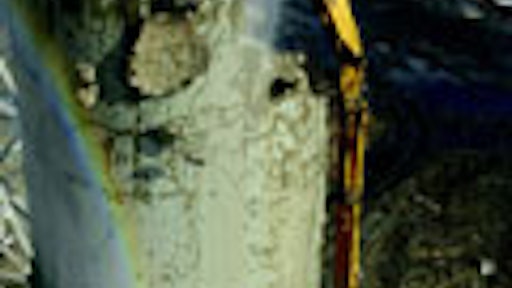 Demolition Contractor: Veit Companies of Rogers, Minnesota
Demolition Project Overview
A pair of 248-foot stacks and operating structures situated as close as 15-feet to each side were safely deconstructed by suspending a Genesis Logix Processor (LXP) from a crane and a second LXP mounted on a high-reach machine to systematically process each stack.

As one of the Upper Midwest's premier demolition contractors, Veit Companies has dealt with its share of unique and challenging projects and, in the process, has acquired an inventory of some of the most effective demolition equipment and technology available. According to Ryan Olson, Veit's general superintendent of demolition, armed with those tools, the smokestack project near downtown Minneapolis became an exercise in demolition creativity.

"There was a lot happening at this site.  It is a former coal-fired utility plant that is converting over to natural gas, so the smokestacks are no longer needed.  However, there were structures close to each stack which made more traditional demo methods such as a wrecking ball impossible.  The owner for whom we were working also ruled out the use of explosives, so we had to find another way to get the stacks down."

One possible option was the use of concrete processing attachments.  Long-time proponents of the technology, they not only knew what the tools could do, they had, in fact, already done a project similar to the one they were now facing.

"A couple years back we did a tall stack demolition and used a cable crane to suspend the processing tool from it.  That worked out well, and since we knew that our Genesis LXP 300 could easily handle the 18-inch thick walls of each stack, that was the approach we took."

Prior to lifting the LXP 300 up to the top of the stacks, Veit first attached it to a bracket which the company designed and fabricated.  Similar to the one used on the previous stack demolition, the new bracket offered performance- and efficiency-based design improvements. According to Olson, despite a few shortcomings in the first design, there was no denying its overall effectiveness.

"One thing we found out quickly on the first job was that the more stable the attachment is while pulverizing the concrete, the better our production rates were.  So we made some revisions to the bracket that holds the LXP 300 in place, allowing the attachment to do what it does best: munch concrete.  The new design also allows the LXP to be installed or removed within minutes."

The crane, a Link Belt with a 275-ton lift capacity, was set up with a luffing jib which allowed the operator easy access to every part of the stack.  Olson says that once the set machine lifted the LXP up onto the stack, it processed down from 248 feet to 125 feet without ever moving.

To minimize the risk of even cosmetic damage to the nearby structure-a 90 foot tall, brick exterior with windows-Veit draped a geotextile fabric over the side facing the stacks, then, in a stark contrast of old versus new technology, used hay bales and steel sheeting to protect the roof from falling debris.

"We always take every precaution to make sure things are protected," says Olson.  "But, the fact is, it was hardly needed-the LXP gives us true, controlled demolition.  The attachment offers multiple jaw options, but in this case it was equipped with a concrete pulverizer jaw which just ate through the 18-inch thick concrete.  If it didn't fall into the mouth of the stack, it fell straight down."

The cable-suspended LXP 300 was used to bring the first stack down to a height of about 125 feet.  At that point, the crane moved to the second stack and production of the first structure was turned over to the company's specialty-tool: a Cat 365C equipped with a Jewell Manufacturing long-reach boom, and a Genesis LXP 200 with concrete cracker jaws.

"That particular machine was put together for us by Genesis and Jewell and it has become something of our calling card in the region," says Olson.  "While it can accommodate either an LXP 200 or an LXP 300, the larger LXP was already in use on the crane, so we outfitted it with the LXP 200 mounted third member.  Doing so offered us reach in excess of the 125-feet we needed to continue processing the stacks."

He adds that both attachments used on the project had water-based dust suppression systems to minimize the risk of airborne pollutants.  Production levels, while good with the crane-suspended attachment, improved even more once the switch was made to the excavator-mounted LXP 200 with concrete cracking jaws.

"The pulverizer jaws and concrete cracking jaws each have applications to which they are best suited," says Olson.  "At the time, we didn't have cracking jaws for the LXP 300 so we relied on the pulverizer jaws and they did a great job for us.  However, the cracker jaw is narrower in design, so all the force is being directed to a smaller area, resulting in more power.  Also, there is a shear blade at the throat of the cracker jaw, so we were able to cut the bar we encountered as we went along.  It was definitely the ideal tool for this job."

Veit's demolition machine brought the stacks down from the 125-foot level to about 30 feet, at which point a standard excavator, equipped with the LXP 300 previously used on the crane, finished the job, downsized the concrete, separated out the remaining rebar.  Though the pair of stacks was completed in three weeks, the overall project was complex with scores of tasks taking place at once.  And, says Olson, there is still one piece of unfinished business.

"There is one more remaining structure, a third smokestack that measures out at about 500 feet," he says.  "That's even beyond the reach of our crane, so we will construct a ring scaffold and have a crew of six to eight workers, each with a pneumatic jackhammer, start at the top and work their way down.  Once we get to the 250-foot level, the crane with the LXP 300 will take over and we'll repeat the process we used on the first two stacks.  We already know it's a proven technique, we know that the Genesis attachments will give us the production we need, and we know we will have it done as quickly and safely as possible.  That works for me."