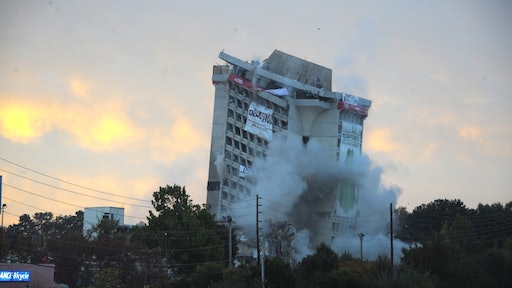 Prior to demolition, all structures required the removal of asbestos-containing materials. This was no small task, as the massive 19-story tower’s entire exterior was covered with asbestos- containing paint.

In order to make way for the Children’s Hospital of Atlanta (CHOA) to expand its corporate campus, five concrete building had to be demolished. Contracted by Gilbane Building Company as the demolition and abatement contractor, National Demolition Association member Atlanta Demolition was tasked with clearing out the five structures within the Atlanta metro area.

The project was no simple task. It required Atlanta Demolition to remove internal and external asbestos, demolish the building and navigate around a major interstate.

Fighting back against asbestos

Prior to demolition, all structures required the removal of asbestos-containing materials. This was no small task, as the massive 19-story tower’s entire exterior was covered with asbestos- containing paint.

Atlanta Demolition and Winter Environmental covered the mast climber platforms with containment chambers to trap all asbestos fibers during removal. The team then repositioned the chambers from one area of the exterior to the next until the entire building’s paint surface was removed under full containment. Using pneumatic grinders with wet suction hoses to control potential fiber release, the team removed the asbestos-containing paint within the sealed containers. Each container was placed under negative air using CFM HEPA air filtration atomizers to prevent asbestos emissions in the work environment. Throughout the process, a third party conducted daily safety inspections, and a testing firm monitored the asbestos removal. When all was said and done, 350,000 square feet of interior space and 80,000 square feet of building surface were abated of asbestos, with Winter Environmental performing the exterior abatement.

Gorman says that safety was a top concern, not only regarding the asbestos abatement but also the fall risk for the workers performing tasks at dangerous heights. “As with all tower demolition work, fall protection was a paramount concern, with all workers at height utilizing proper harness and tie-off procedures. A site safety and health officer (SSHO) was present during all operations, and daily safety meetings were held in the mornings. Atlanta Demolition, SSD, Winter Environmental, Dykon and Gilbane enforced industry best safety procedures to ensure the safety of all workers and the surrounding community.” With the rigorous safety measures in place, Gorman reports that they didn’t experience any lost time incidents on the job.

Devising a plan of attack

While abatement took place on the 19-story structure, the Atlanta Demolition team got to work dismantling the smaller structures, leaving only the five-story structure to act as a blast buffer for the crowds on the day of the 19-story tower implosion. “The five-, three and two-story structures were demolished by a combination of structural dismantling, controlled collapse of structures and mechanical and manual processing of the key elements once they were collapsed. The debris was sorted on site for disposal and recycling,” Gorman said.

Once the asbestos was entirely removed from the 19-story tower, the team got to work preparing it for the implosion. The explosive team, led by Jim Redyke and Ron Gilbert of Dykon Explosive Demolition, reviewed all structural drawings of the tower and decided to load explosives and “shoot” on six separate floors for ultimate control of the implosion. These floors were zero, one, three, six, 10 and 14.

Starting on the upper floors, the team completely stripped the 19-story structure of all interior surfacing materials, leaving only the block walls and concrete. After ripping out the elevator cars, the team removed all debris from the structure via internal trash chutes constructed in the elevator shafts. In preparation for the implosion, hydraulic drills powered by compressors drilled three- to four-inch holes, per the blast plan specifications, to accommodate the approximately 300 pounds of explosive material used to implode the structure. All columns to be shot and the 10th floor were wrapped with three layers of chain-link fence and three layers of 14-ounce Geotech fabric. Finally, the team weakened the stairs and elevators by cutting rails and hammering out walls and concrete on the lower blast floors.

The preparation for the implosion involved more than prepping the buildings; in fact, one of the challenges the crew had to deal with was working around the various site complications. Bordered by the Children’s Healthcare Campus and Interstate 85 on the north and west, North Druid Hills Road to the south, and a McDonald’s restaurant to the east approximately 85 feet from the tower, the site was surrounded. To work around these impediments, Gorman said communication was of utmost importance, and throughout the process the team abided by its detailed communications plan and Dykon’s blast plan.

In addition, the team conducted direct and ongoing communication with DeKalb County government, DeKalb police and fire departments, Georgia Department of Transportation and State Patrol, all adjacent business owners and managers, the nearby cities of Atlanta and Brookhaven and the FAA. They also sent out press releases and information to the local media, which ensured that everyone was aware of all safety issues that might occur through the duration of the project. Furthermore, on implosion day, the team hired 26 off duty, uniformed DeKalb police officers, who secured the site, managed the traffic and crowds, and worked with Atlanta Demolition personnel to establish the site’s perimeter. Early that morning, security personnel closed off roads within the CHOA campus, and fire and ambulance teams set up at various locations around the perimeter.

To deal with the surrounding roads and interstate, Gorman said a team of 10 DeKalb police officers in communication with Atlanta Demolition personnel enforced “rolling road blocks” in their official vehicles to ensure that the adjacent North Druid Hills Road and the northbound and southbound lanes of I-85 would be free of traffic during the blast itself and immediately following to avoid obscured visibility due to airborne dust or falling debris.

With all the work and effort that went into preparing the implosion site, possibly no one was more excited than 4-year-old DJ Pitts, whose affinity for wearing superhero capes while undergoing intensive care at CHOA earned him the nickname “Super” DJ. On November 7, 2014, the day of the implosion, DJ had the privilege of pushing the button that brought down the building.