J.R. Vinagro demolishes two buildings for the MathWorks computer software company dealing with unforeseen asbestos in one of the buildings 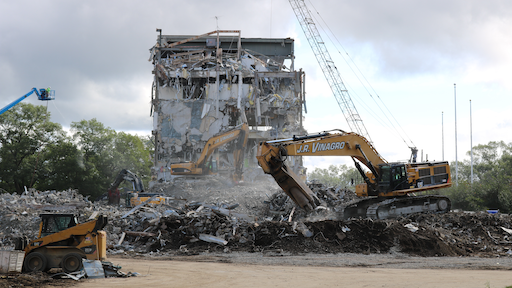 Thirty years ago, computer software company MathWorks moved from Silicon Valley to Natick, MA, looking for engineering talent. The company found what it was looking for and today is one of the state’s largest tech firms. Its size is why, in 2015, work began on expanding the MathWorks campus. Enter National Demolition Association (NDA) member J.R. Vinagro.

J.R. Vinagro demolished two buildings for MathWorks under Consigli, the general contractor of the expansion project. “Consigli chose us for several reasons: pricing, our safety record and for the C&D recycling facility that we owned and operated,” says J.R. Vinagro’s Ryan R. Billingsley.

The company completed the demolition of the first building — a two-story, 350,000-square-foot structure — in spring 2016. They had a deadline of 10 weeks, which they easily met. However, they couldn’t begin on phase two of the project until Consigli built MathWorks a new building in the footprint of the one J.R. Vinagro had demolished.

The second building was completed in November 2018. It was smaller, just 150,00 square feet, but it had a four-story section that was 60 feet high and a six-story section over 100 feet tall with a 30-foot-deep basement.

“Phase 2 took 14 weeks because of unforeseen asbestos found in the foundation,” Billingsley says. “It’s common to find unforeseen asbestos. You typically find it in places that the asbestos survey team cannot see, like below ground level on a foundation where we found it. We are a licensed asbestos contractor, so our guys are aware that if they see suspect material, they will bring it to the supervisor’s attention, and it will be handled accordingly.”

For the removal of the second building, J.R. Vinagro started by removing the rugs, roofing and wood doors by hand. The four-story section was taken down by a CAT 390D and CAT 385C with shears. The six-story portion was demoed with a high reach excavator and wrecking ball.

“Even though the second build was smaller square-footage wise, it was definitely more challenging,” Billingsley says. “The first building’s challenge was meeting the tight deadline. The second building was more challenging due to the integrity of the building and the six-story section over the deep basement. We were not able to walk anything out on the grade-level slab to demolish that area due to the deep basement. That’s where the crane with wrecking ball and the high reach excavator really came into play.”

In addition to the challenges the deep basement presented, controlling the dust on such a tall building “sandwiched between a brand-new building and a major artery road” was also difficult, Billingsley says.

Overall, Billingsley says the job was “definitely a success.”

“Our team did an amazing job meeting the challenge. A successful job to me, foremost, is a safe job with zero injuries, which this one was. The job was done in a timely manner, and the entire crew learned from some of the challenges that were thrown at us.”

Are You Educated on Asbestos?