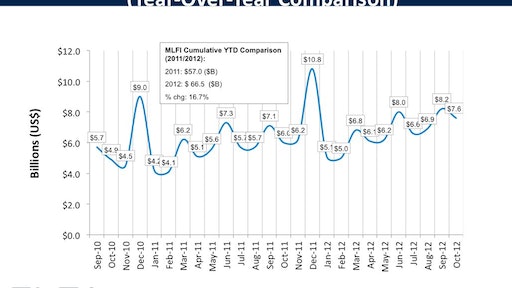 The Equipment Leasing and Finance Association’s (ELFA) Monthly Leasing and Finance Index (MLFI-25), which reports economic activity for the $628 billion equipment finance sector, showed overall new business volume for October was $7.6 billion, up 27 percent from volume of $6 billion in the same period in 2011. Volume was down 7 percent from the previous month. Year-to-date cumulative new business volume increased 17 percent.

Credit approvals were unchanged in October at 79.5 percent. Sixty-six percent of participating organizations reported submitting more transactions for approval during October, up from 54 percent the previous month.

Finally, total headcount for equipment finance companies was up 1 percent from the previous month and declined 2 percent year over year.

Separately, the Equipment Leasing & Finance Foundation's Monthly Confidence Index (MCI-EFI) for November is 49.9, a decrease from the October index of 53.3, reflecting industry participants’ post-election concerns over issues including the fiscal cliff, economic policy and taxes. A confidence level of 50 indicates a neither positive nor negative outlook overall.

"Lease financings continue to show modest growth overall, despite soft patches evident in certain equipment and end-user sectors recently," said ELFA President and CEO William G. Sutton, CAE. "With U.S. elections now behind us and recent indications by policy makers to find a solution to the ‘fiscal cliff,’ the cloud of uncertainty that has frozen the economy during the past 12 months may be lifting. We hope that the recent no-growth scenario gripping our nation’s economy will transition to a more normalized recovery that will cause businesses to feel more confident about their future and result in additional investment in capital equipment and job creation.”