The November 2012 Monthly Confidence Index is at 49.9, showing a neutral overall outlook for the industry 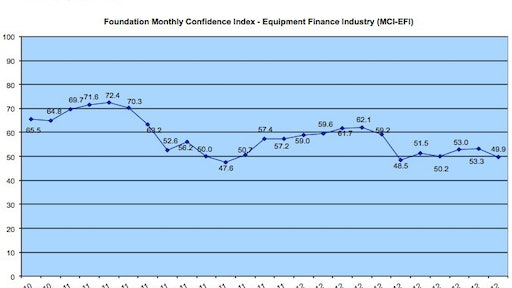 Overall, confidence in the equipment finance market is 49.9, a decrease from the October index of 53.3, reflecting many industry participants' post-election concerns over issues including the fiscal cliff, economic policy and taxes.

The Equipment Leasing & Finance Foundation (the Foundation) released the November 2012 Monthly Confidence Index for the Equipment Finance Industry (MCI-EFI) today. Overall, confidence in the equipment finance market is 49.9, a decrease from the October index of 53.3, reflecting many industry participants’ post-election concerns over issues including the fiscal cliff, economic policy and taxes. A confidence level of 50 indicates a neither positive nor negative outlook overall.

Business conditions over the next four months

Demand for leases and loans to fund capital expenditures (capex)

Spending during the next six months