Sixty-six percent of survey respondents evaluate the U.S. economy as fair while only 34% rate it as poor 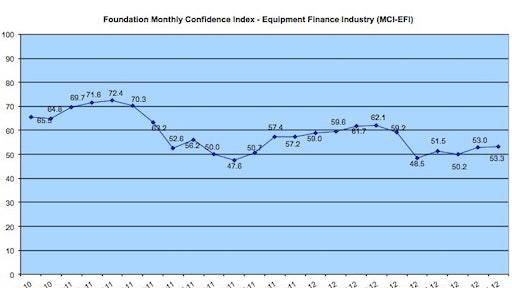 Overall, confidence in the equipment finance market is 53.3, relatively unchanged from the September index of 53, reflecting steady industry confidence despite economic, political and regulatory concerns.

When asked about the outlook for the future, MCI survey respondent Harry Kaplun, President, Frost Equipment Leasing and Finance, said, “Near term, results will continue to be strong. In the longer term, significant variables like accounting rules, depreciation rates and cost of funds will change the landscape.”

When asked to assess their business conditions over the next four months, respondents said:

Over the next six months: