Confidence in the equipment finance market is at 53, up from the August index of 50.2 and reflecting increased optimism in the market 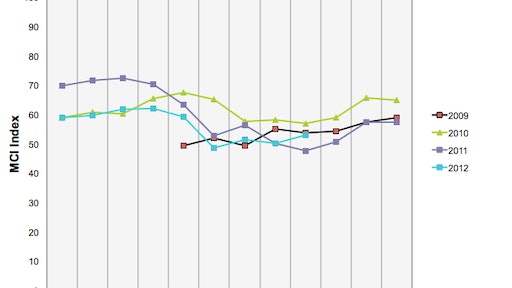 The Equipment Leasing & Finance Foundation (the Foundation) released the September 2012 Monthly Confidence Index for the Equipment Finance Industry (MCI-EFI) today. Overall, confidence in the equipment finance market is 53.0, up from the August index of 50.2, reflecting increased optimism despite concerns over companies’ willingness to expand their businesses in the face of economic and political uncertainty.

When asked about the outlook for the future, MCI survey respondent Anthony Cracchiolo, president and chief executive officer, Vendor Services, U.S. Bank Equipment Finance, said, “The industry is performing well and new businesses are entering the segment to join the positive experience our asset class enjoys. However, the growth of our industry is tightly aligned with the overall U.S. economy, and our industry's future will be determined by the broader actions of the U.S. economy.”

Designed to collect leadership data, the Monthly Confidence Index reports a qualitative assessment of both the prevailing business conditions and expectations for the future as reported by key executives from the $628 billion equipment finance sector.

Monthly Leasing and Finance Index Up 5% in August 2012