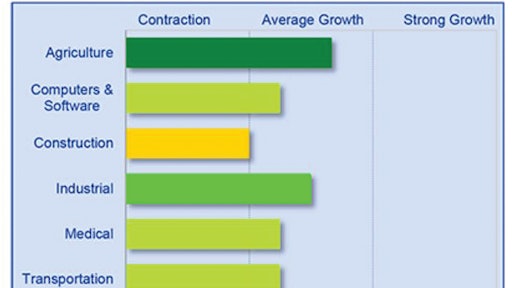 Construction equipment investment continued its rapid growth, up 38% year-over-year in the second quarter, as investment has continued to grow at what is likely an unsustainable rate. Leading indicators all decelerated recently, suggesting that a negative correction could occur within the next three to six months.

Investment in equipment and software is expected to grow 3.3 percent in 2013, according to the Q4 update to the 2013 Equipment Leasing & Finance U.S. Economic Outlook released today by the Equipment Leasing & Finance Foundation. Equipment and software investment slowed in the second quarter, but the report predicts modest improvement in the second half of the year, depending on the outcome of the current fiscal policy debates. Growth is expected to be mixed, with some sectors outperforming others. The report, which is focused on the $725 billion equipment leasing and finance industry, forecasts equipment investment and capital spending in the United States and evaluates the effects of various related and external factors in play currently and into the foreseeable future.

According to the Foundation report, the U.S. economy is largely in the same position it has been in for the past six months, with improving fundamentals weighed down by a number of headwinds resulting in subpar growth. Positive economic drivers noted in the report include a recovering housing market, inexpensive natural gas benefiting households and the industrial sector, solid auto sales, rising consumer confidence, improving credit availability for households and businesses and steady job gains. However, the report notes that a number of nagging headwinds, including fiscal consolidation, rising oil prices and renewed fiscal policy tensions continue to constrain growth.

William G. Sutton, CAE, president of the Foundation and president and CEO of the Equipment Leasing and Finance Association, said, “Equipment and software investment in 2013 continues to look like a tale of two halves, with slower growth in the first half of the year and modest improvement forecast for the second half. However, an atmosphere of uncertainty prevails, spurred by current fiscal policy debates, including the looming debt-ceiling fight and a stubbornly tepid U.S. and global economy.”

Highlights from the study:

Equipment and software investment slowed from 3.1 percent annualized growth in Q1 2013 to just 1 percent (quarter-to-quarter annualized) in Q2. The slower growth is a reflection of broader macroeconomic headwinds and uncertainty but also categorical revisions to the Bureau of Economic Analysis’s equipment investment accounts. Looking ahead, a modest uptick in investment is expected through the end of the year, with an overall forecast of 3.3 percent growth in equipment and software investment for 2013.

Overall, the outlook for credit markets remains optimistic as investors continue to be risk-on, credit availability is steadily increasing, and the Federal Reserve is expected to maintain a near-zero short-term interest policy until economic conditions suggest otherwise.

The Foundation produces the Equipment Leasing & Finance U.S. Economic Outlook report in partnership with economics and public policy consulting firm Keybridge Research. The annual economic forecast released in December provides a three-to-six-month outlook for industry investment with data, including a summary of investment trends in key equipment markets, credit market conditions, the U.S. macroeconomic outlook and key economic indicators. The Q4 report is the third update to the 2013 Annual Outlook. The 2014 Annual Outlook will be published in December.

Equipment and Software Investment Will Increase in Second Half of 2013

Equipment, Software Investment Will Grow At Below-average Rate in 2013