Ninety-seven percent of the leadership evaluate the current U.S. economy as “fair,” and no one rates it as poor, according to the January Confidence Index 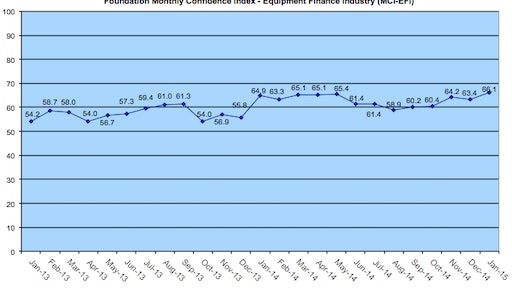 Overall, confidence in the equipment finance market is 66.1, an increase from the December index of 63.4 and the highest level in the last three years.

The Equipment Leasing & Finance Foundation's (the Foundation) January 2015 Monthly Confidence Index for the Equipment Finance Industry (MCI-EFI) indicated confidence in the equipment finance market is 66.1, an increase from the December index of 63.4 and the highest level in the last three years.

When asked about the outlook for the future, MCI-EFI survey respondent Thomas Jaschik, President, BB&T Equipment Finance, said, “With third quarter GDP in excess of 5 percent, the economy is primed for a surge in capital equipment spending. I believe domestic companies now have the confidence to make substantial investments in plant and equipment to facilitate growth. This could lead to a record year for equipment finance in 2015.”

Three steps to protect workers and those around the work area - and limit legal fall-out - with a safety first construction project mindset
April 18, 2016
Follow Us