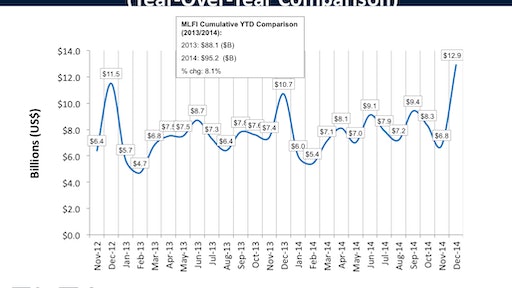 December new business volume was up 20% year-over-year, up 90% month-to-month and up 8% year-end.

Credit approvals totaled 78.6 percent in December, a slight decrease from 79.1 percent the previous month.  Total headcount for equipment finance companies was up 0.5 percent year over year.

Separately, the Equipment Leasing & Finance Foundation's Monthly Confidence Index (MCI-EFI) for January is 66.1, an increase from the December index of 63.4 and the highest level in the last three years.

“Despite a very volatile Q4 equities market, the U.S. economy ended the year in a strong position, evidenced by lower unemployment, continued healing in the housing market, gas prices that seem to be declining almost daily, and robust consumer spending," said ELFA President and CEO William G. Sutton, CAE. "Against this backdrop, C&I lending picked up as commercial businesses made significant investments in plant and equipment.  Despite the typical end-of-year seasonal spike, December’s MLFI-25 statistics enter record territory:  the 20 percent increase in year-over-year new business volume was one of the largest December increases in the history of the MLFI-25.  Add to this healthy credit markets and the equipment finance industry appears poised for the breakout performance industry observers have been waiting for.  We hope that this momentum will carry forward into 2015.”

“The rise in new business volume for 2014 reflects what we hear in conversations with Dell customers and channel partners every day," Bill Wavro, President, Dell Financial Services. "Whether an entrepreneur saving cash for key business investments or a large enterprise looking to lower total cost of ownership, customers are seeing how financing large equipment and technology transactions delivers a real bottom-line and operational benefit for their businesses.”