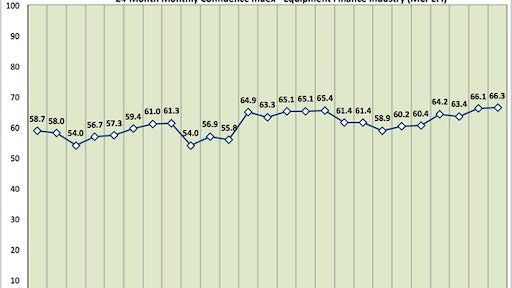 The Equipment Leasing & Finance Foundation's February Monthly Confidence Index (MCI) for the $903 billion equipment finance industry showed a level of 66.3, a slight increase from the January index of 66.1, and the highest level in the last three years.

The Equipment Leasing & Finance Foundation's February 2015 Monthly Confidence Index for the Equipment Finance Industry (MCI-EFI) reports that overall, confidence in the equipment finance market is 66.3, a slight increase from the three-year high level reached by the January index of 66.1.

When asked about the outlook for the future, MCI-EFI survey respondent William Verhelle, Chief Executive Officer, First American Equipment Finance, a City National Bank Company, said, “The economy continues to improve. First American is seeing increased equipment acquisition activity among the large corporate borrowers we serve. We are optimistic that lower energy costs, if they remain at current low levels, will drive increased U.S. economic activity in the second half of 2015. We are more optimistic about the U.S. economy today than we have been at any time during the past six years.”