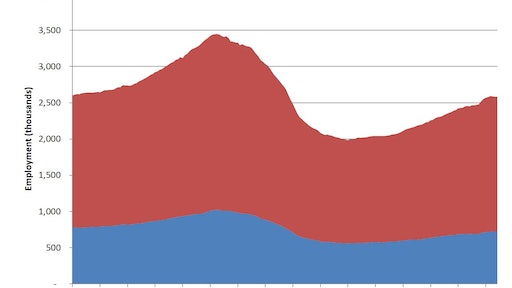 Monthly employment data for July 2016 indicate that home builder and remodeler net hiring continued to be weak, as sector employment increased by only 700, after posting declines in May and April. Residential construction employment now stands at 2.583 million, broken down as 720,000 builders and 1.863 million residential specialty trade contractors.

The count of unfilled jobs in the overall construction sector rose in June after setting a post-Great Recession high in March. However, the rate of jobs being added to the residential construction sector has slowed noticeably over the last few months suggesting ongoing labor access issues.

According to the BLS Job Openings and Labor Turnover Survey (JOLTS) and National Association of Home Builders (NAHB) analysis, the number of open construction sector jobs (on a seasonally adjusted basis) rose to 208,000 in June, after establishing a cycle high of 215,000 in March. The March estimate represents the highest monthly count of open, unfilled jobs since May 2007, with June the second highest.

The construction sector hiring rate, as measured on a 12-month moving average basis, declined to 4.7% in June.

Monthly employment data for July 2016 (the employment count data from the BLS establishment survey are published one month ahead of the JOLTS data) indicate that home builder and remodeler net hiring continued to be weak, as sector employment increased by only 700, after posting declines in May and April. This recent period of hiring weakness reduced the six-month moving average of jobs gains for residential construction to just under 2,500 per month.

Over the last 12 months home builders and remodelers have, nonetheless, added 120,000 jobs on a net basis. Since the low point of industry employment following the Great Recession, residential construction has gained 597,000 positions.