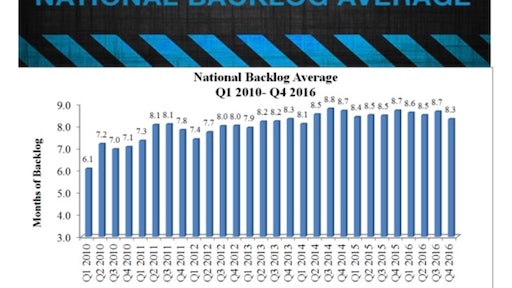 Overall, backlog — the amount of work under contract but yet to be performed — fell to 8.3 months during the fourth quarter. CBI rose a modest 0.4 months or 4.5% on a year-over-year basis.

Construction backlog fell by 4% during the last quarter of 2016, according to Associated Builders and Contractors' (ABC) latest Construction Backlog Indicator (CBI). Contractors in each segment surveyed — commercial/institutional, infrastructure and heavy industrial — all saw lower backlog during the fourth quarter, with firms in the heavy industrial segment experiencing the largest drop, down 16.8% to an average backlog of 5.5 months.

Overall, backlog — the amount of work under contract but yet to be performed — fell to 8.3 months during the fourth quarter. CBI rose a modest 0.4 months or 4.5% on a year-over-year basis.

“Many factors contributed to the dip in contractors’ backlog, but none is more important than the lack of public construction spending momentum,” said ABC Chief Economist Anirban Basu. “Indeed, backlog among firms specializing in infrastructure has declined from 12.2 months during the final three months of 2015 to 10.6 months one year later.

“A still fragile global economy, strong U.S. dollar, and stubbornly low energy prices have helped to translate into declining heavy industrial backlog,” said Basu. “The only category experiencing construction spending stability is the commercial segment. Over the past year, construction spending in office, lodging and relative categories has surged. During that same period, the CBI reading in the commercial/institutional category has remained stable.”