The June Monthly Leasing and Finance Index shows new business volume up 10% year-over-year, up 29% month-to-month and up 14% year-to-date while the volume of financed equipment in June was the greatest for any single month since December 2008 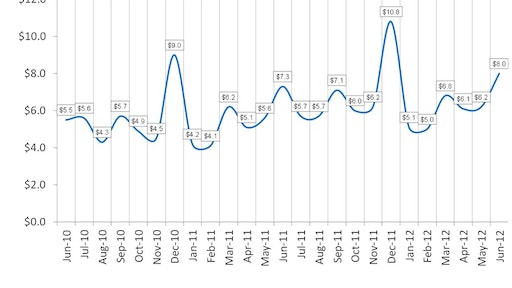 This chart shows a year-over-year comparision of new business volume (in billions).

The Equipment Leasing and Finance Association’s (ELFA) Monthly Leasing and Finance Index (MLFI-25), which reports economic activity for the $628 billion equipment finance sector, showed overall new business volume for June was $8 billion, up 9.5 percent from volume of $7.3 billion in the same period in 2011. Volume was up 29 percent from the previous month. Year-to-date cumulative new business volume increased 14.5 percent.

Credit approvals increased to 78.7 percent in June from 78.3 percent in May. Sixty-five percent of participating organizations reported submitting more transactions for approval during June, down from 75 percent in May.

Separately, the Equipment Leasing & Finance Foundation's Monthly Confidence Index (MCI-EFI) for July is 51.5, up from the June index of 48.5, and reflects continuing concern over external economic factors and regulatory and political uncertainty.

"Despite recent reports of a softening economy, the level of capital investment by U.S. businesses - both large and small - continues to accelerate," said ELFA President and CEO William G. Sutton, CAE. " In fact, the volume of equipment financed in June, as illustrated by the MLFI-25, surpasses that of any single month except for year-end December activity since the beginning of the Great Recession in 2008. We hope that, in spite of the factors adversely affecting economies overseas, our businesses here at home will be able to continue to invest in productive assets."

"The equipment finance industry is currently benefiting from several factors, including increased CapEx financing in many sectors and improved metrics across the credit spectrum," said Rick Remiker, president, Huntington Equipment Finance. "A large part of this positive trend is due to an improving Midwest economy, formerly known as the 'Rust Belt,' and now being referred to as the 'Recovery Belt.' While all of this is good news for the industry, and near-term business trends remain positive, we remain cautious about global economic concerns dampening demand during the second half of the year.”

The MLFI-25 is the only index that reflects capex, or the volume of commercial equipment financed in the U.S. The MLFI-25 is released globally each month on the day before the U.S. Department of Commerce releases the durable goods report. The MLFI-25 is a financial indicator that complements the durable goods report and other economic indexes, including the Institute for Supply Management Index, which reports economic activity in the manufacturing sector. Together with the MLFI-25 these reports provide a complete view of the status of productive assets in the U.S. economy: equipment produced, acquired and financed.

The MLFI-25 is a time series that reflects two years of business activity for the 25 companies currently participating in the survey.

Lightweight, portable, desktop simulator can be easily transported and set up in minutes for classroom or on the go training and to quickly assess new operator skills.
CM Labs Simulations, Inc.
Jul 12th, 2021

When it comes to compact excavators, the decision to buy, rent or lease calls for more than comparing costs.
Becky Schultz
Jul 9th, 2021

What can construction contractors do to keep employees engaged with virtual training?
Caterpillar - Cat
Jul 7th, 2021

This software-as-a-service (SaaS) application created by KWIPPED, will be used by at least seven equipment sellers at World of Concrete to offer potential buyers immediate financing options from multiple competing lenders.
Jun 2nd, 2021

The webinar series, “Protecting Your Construction Company in the Age of COVID,” is free to industry professionals who register in advance, and unfolds on April 14 and May 12, 2021.
Mar 25th, 2021

KEEN is offering grants to groups that support women in the trades through its She Builds program.
KEEN
Mar 23rd, 2021