The July 2012 Monthly Confidence Index is at 51.5, up from 48.5 in June 2012, showing improved confidence in the equipment finance industry 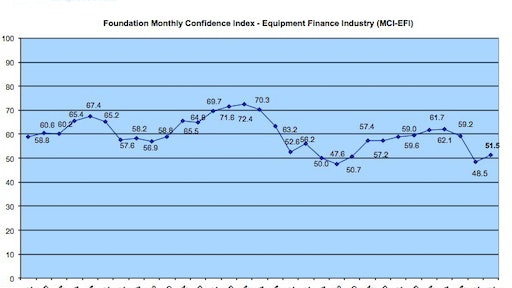 The Equipment Leasing & Finance Foundation (the Foundation) released the July 2012 Monthly Confidence Index for the Equipment Finance Industry (MCI-EFI), and confidence in the equipment finance market is 51.5, up from the June index of 48.5. This reflects continuing concern over external economic factors and regulatory and political uncertainty.

"Continued volatility/uncertainty at home and abroad may inhibit planned/needed capital expenditures during the next six months, but low interest rates and tax incentives will enable our industry to generate modest increases in asset volume and profitability through the remainder of 2012," said Russell D. Nelson, president, Farm Credit Leasing Services Corporation. "Improving credit quality, stable earnings and demand for innovative/creative lease and loan products should position our industry for improved growth in 2013 and beyond."

Business conditions over the next four months:

Demand for leases and loans to fund capital expenditures (capex):