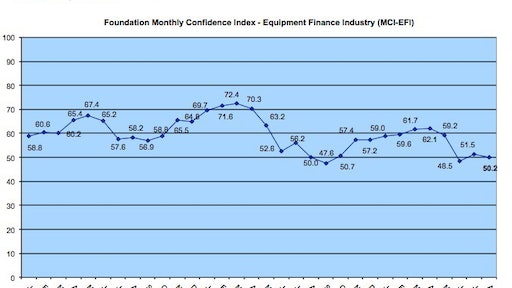 Overall, confidence in the equipment finance market is 50.2, down from the July index of 51.5, reflecting ongoing industry concerns over economic, regulatory and political uncertainty.

The Equipment Leasing & Finance Foundation (the Foundation) released the August 2012 Monthly Confidence Index for the Equipment Finance Industry (MCI-EFI) today. Overall, confidence in the equipment finance market is 50.2, down from the July index of 51.5, reflecting ongoing industry concerns over economic, regulatory and political uncertainty.

"My long term view of the equipment finance industry is strong; the shorter term view of the U.S. economy and worldwide economy is volatile," said survey respondent John McQueen, executive vice president and head of Wells Fargo Equipment Finance. "The U.S. economic growth rate and the stability for the economy will continue to slow business investment."

When asked to assess their business conditions over the next four months, here is what survey respondents said:

Demand for leases and loans to fund capital expenditures (capex):

Lightweight, portable, desktop simulator can be easily transported and set up in minutes for classroom or on the go training and to quickly assess new operator skills.
CM Labs Simulations, Inc.
Jul 12th, 2021

When it comes to compact excavators, the decision to buy, rent or lease calls for more than comparing costs.
Becky Schultz
Jul 9th, 2021

What can construction contractors do to keep employees engaged with virtual training?
Caterpillar - Cat
Jul 7th, 2021

This software-as-a-service (SaaS) application created by KWIPPED, will be used by at least seven equipment sellers at World of Concrete to offer potential buyers immediate financing options from multiple competing lenders.
Jun 2nd, 2021

The webinar series, “Protecting Your Construction Company in the Age of COVID,” is free to industry professionals who register in advance, and unfolds on April 14 and May 12, 2021.
Mar 25th, 2021

KEEN is offering grants to groups that support women in the trades through its She Builds program.
KEEN
Mar 23rd, 2021

Takeuchi-US is preparing for the opening of the new Takeuchi Training Center with the addition of Ashleigh Gross as a technical trainer and Megan McFarlane as training center coordinator.
Takeuchi-US
Mar 4th, 2021
Follow Us